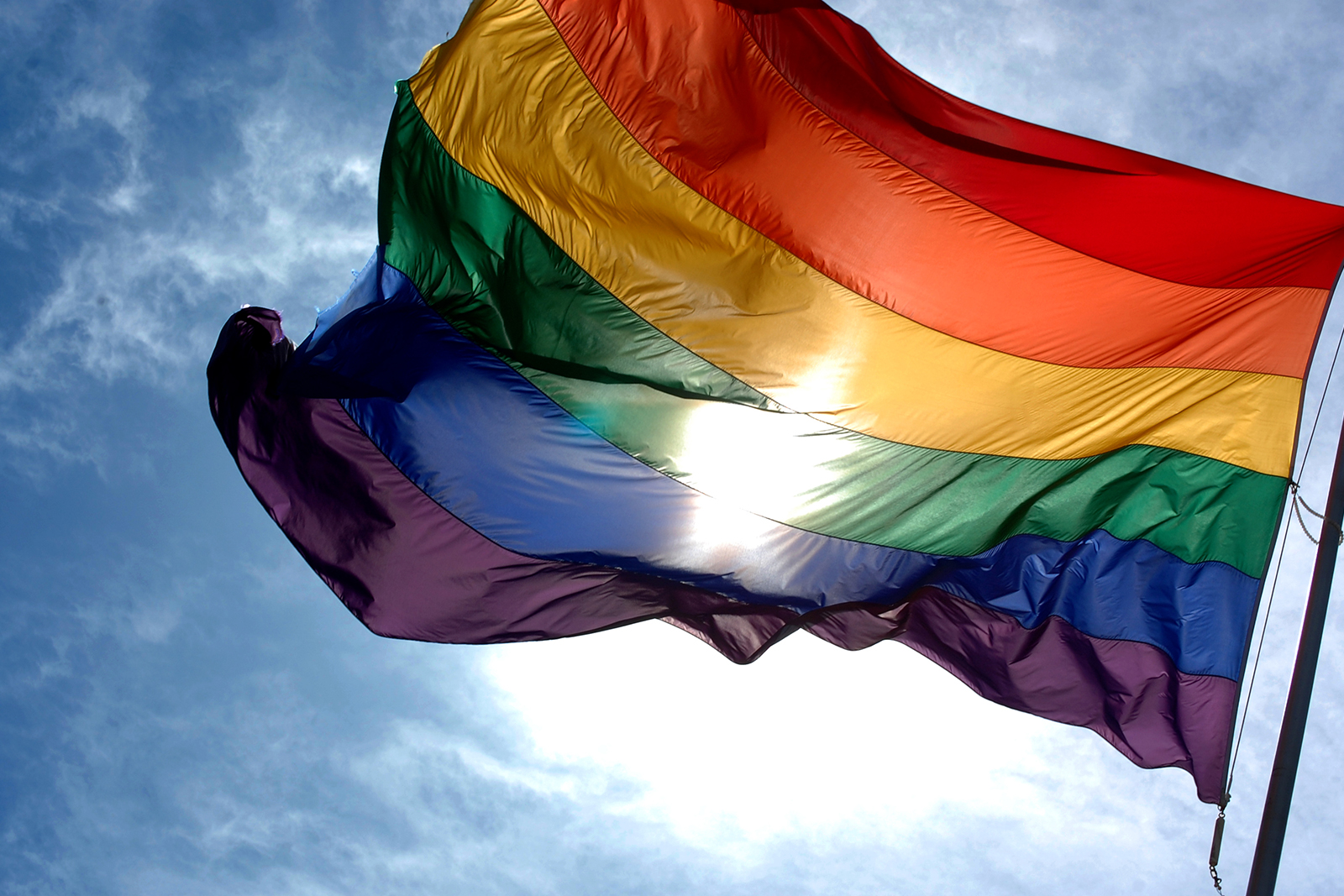 We needed something beautiful. Something from us. The rainbow is so perfect because it really fits our diversity in terms of race, gender, ages, all of those things. Plus, it’s a natural flag — it’s from the sky!” Gilbert Baker, creator of the Gay Rainbow Freedom Flag

The gay Rainbow Flag first flew at the San Francisco Gay and Lesbian Freedom Day Parade in 1978, the year that American politician Harvey Milk was elected to office. Milk, affectionately dubbed The Mayor of Castro Street, was the first openly gay official in the history of California. He was looking for a positive symbol to replace the pink triangle and its horrific connections to the Nazi concentration camps.

Harvey Milk asked his artist friend Gilbert Baker to create something powerful, a highly visual symbol of gay pride. Baker chose a flag, saying: “Our job as gay people was to come out, to be visible, to live in the truth, as I say, to get out of the lie. A flag really fit that mission, because that’s a way of proclaiming your visibility or saying, ‘This is who I am!’”

Borrowing symbolism from the hippy movement, the black civil right groups – and no doubt the Wizard of Oz (ironically Baker was from Kansas) – he designed a Rainbow Flag, using the sewing skills he had honed creating his own outfits as a prominent drag artist, as well as creating banners for protest marches.

Along with about 30 volunteers, two gigantic prototypes of the flag were hand-stitched and hand-dyed. The flag had eight stripes, each representing an aspect of the community: hot pink for sex, red for life, orange for healing, yellow for sun, green for nature, turquoise for art, indigo for harmony and violet for spirit. They were instantly adopted by the gay community and proudly flew on Francisco Freedom Day Parade on 25 June 1978.

“I’ll always remember Harvey riding through the streets under the giant Rainbow Flag, waving to the crowds,” said Baker. “It was an incredible moment of joy and we all felt that we were going to change the world.”

The following year, when Baker took his design to the San Francisco Flag Company to have it mass produced, he was forced to remove the pink due to production constraints. He had hand-died the original flag and then discovered that pink was not a commercially available colour. He was also forced to replace indigo with royal blue.

When Harvey Milk was assassinated later that year; the Pride Parade Committee saw the flag as the perfect symbol to unite the community in protest of this tragedy. The committee also removed the indigo stripe to make the colours symmetrical when they were hung from lamp posts and along the parade route: red, orange and yellow on one side of the street and green, blue and yellow on the other.

This six-colour version caught on and soon became the worldwide symbol of gay pride and diversity that it is today. Indeed, it is officially recognised by the International Congress of Flag Makers as such. During the 1994 New York Gay Pride celebrations, over 10,000 people carried a 30-foot-wide by one-mile-long Rainbow Flag through the streets of Manhattan to commemorate the 25th anniversary of the Stonewall Riots. The flag was later cut up and sent to over 100 Pride events across the world.

At the 2004 Key West Pride Festival, Gilbert Baker unveiled a re-creation of his original eightcoloured flag saying, “We lost two of the original colours, pink and turquoise. It’s time, however, to restore the original design. First, it is simply more beautiful and more authentic. Moreover, when we lost the pink, we lost the symbol for our sexual liberation. The missing turquoise honours Native Americans and the magic of life. Both colours are needed to embrace our history.”

His suggestion has not been adopted by the worldwide gay community; however they have embraced the six-colour Rainbow Flag to their hearts. A flag outside a venue or a rainbow sticker in a window has become an international sign that this is a gay-friendly safe space. LGBT+ events across the globe use the flag as a symbol of defiance, pride and celebration, even in countries where you can risk your life to do so.

Back in April in the UK, a flash mob of thousands of Harry Styles’s fans used pieces of coloured gel plastic in front of the torches of their mobile phones to turn his 02 concert into a spectacular Rainbow Flag. His gigs have been repeatedly praised for serving as safe spaces for young women and the LGBT+ community 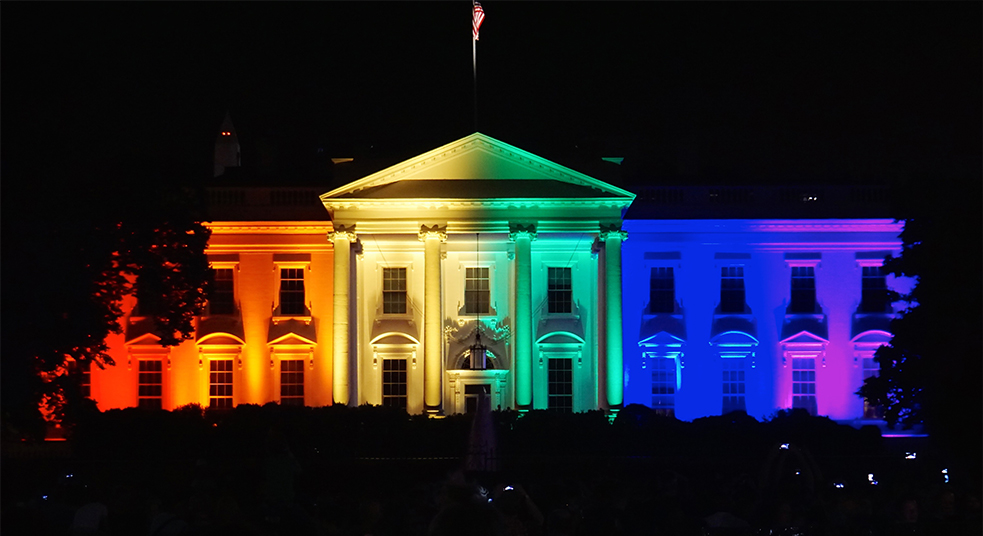 Everywhere from the British Museum to the Empire State Building has been lit up with rainbow colours to celebrate Pride. However, without doubt one of the most moving moments was when President Obama arranged for the White House to be illuminated with a gay Pride rainbow in celebration of gay marriage equality in the US.

The gay Rainbow Flag is also sometimes known as the Freedom Flag and should always be displayed with the red on the top or to the left, following the natural colour sequence of a rainbow. Gilbert Baker refused to trademark the flag seeing it as a symbol for the LGBT+ community and, indeed, fought legal battles to ensure the design always remained in the public domain.

Baker died in March of last year at the age of 65. In tribute, a font was created called “Gilbert” in his honour. It can be downloaded for free from typewithpride.com. He left an incredible legacy – something that defined his life and symbol for everyone in the world who just wants to be free to be themselves, without prejudice, persecution or judgement.

For Baker it was the most important thing he ever achieved in his life. “It all goes back to the first moment of the first flag back in 1978 for me,” he said. “Raising it up and seeing it there blowing in the wind for everyone to see. It completely astounded me that people just got it, in an instant like a bolt of lightning – that this was their flag. It belonged to all of us. It was the most thrilling moment of my life. Because I knew right then that this was the most important thing I would ever do – that my whole life was going to be about the Rainbow Flag.”