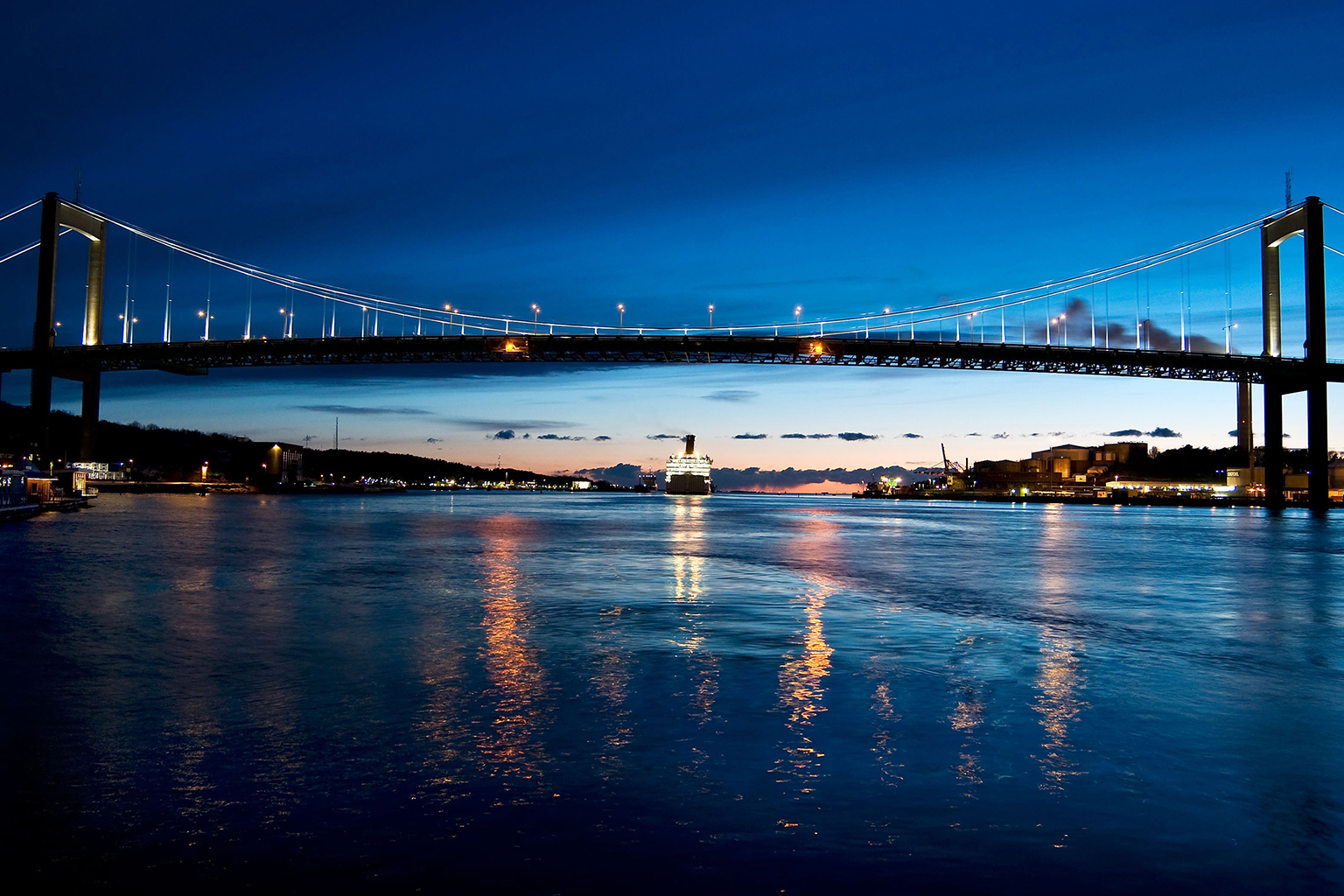 Pink streams of skylight flash across an interminable watery darkness. A huge cruiser with more layers than a celebrity wedding cake chugs towards a bridge in a harbour dotted with gigantic looming cranes. This spectacular view of Gothenburg reflects its status as Sweden’s historic, industrial heartland. It’s the largest port in Scandinavia – 11,000-plus ships pass through per annum, from over 140 global destinations – and a vital manufacturing hub.

Situated on the west coast of Sweden and bisected by the soothing azure of the Göta älv river, the city was founded in 1621 by King Gustavus Adolphus. Nowadays, there’s more fun to be had here than playing peeping Tom outside a brothel window – whether it’s hopping across the stunning archipelago, going to the fantastic Liseberg amusement park, or popping into a string of art galleries and museums.

A myriad of quaint, pastel-coloured wooden houses stand astride cobbled pavements sprouting with tufts of moss. In the backdrop, the slate-green spire of a magnificent 19th-century stone church dominates the vista like a redwood in a sea of vines. Welcome to Haga, the oldest and most interesting district in Gothenburg, dating back to 1648. It’s wonderfully crammed with specialist clothes and antique shops where you can buy everything from bowler hats and lace dresses (pity they didn’t have my size, in both cases) to rare silver cutlery and art deco furniture.

Strolling around, I would never guess this beautiful quarter has had a more drastic makeover than Victoria Beckham post-Spice Girls. Indeed, for much of the 1800s, it was a notorious working class neighbourhood, and in the 1960s a rundown hangout for hardcore hippies. Yet, just 20 years later, buildings were either restored or demolished and replaced by post-modernistic replicas. So take it easy, and soak up the exquisite vibe. And while you do, as this locale is such a smörgåsbord of eclectic coffee outlets, enjoy the Swedish tradition of a fika: a break to have a beverage and a snack with family, buddies or colleagues.

Drift back to a time when the Vikings still ruled this domain, with an excursion to the untouched scenery of Gothenburg’s fabulous north and south archipelagos. A staple of many Norse sagas, this chain of dozens of islands appear as dramatic pinpricks of yellow, green and brown caught up in an avalanche of deep blue: the Kattegat sea. The most engaging are accessible by ferry, and each one has a quintessential charm that makes it a pleasure-seeker’s dream. Whether it’s Vrångö with its pristine sandy beaches and nature reserve (Ternstigen); Donsö, a bucket list must if one’s into exceptional fishing, hiking or bathing; or Hönö, which contains a plethora of otherworldly (smallish) rock formations that are perfect for bouldering.

For the excitement of all the fun of the fair, it’s possible to get a vintage tram – there’s an extensive network of more modern ones, too – along the town’s main drag, Kungsportsavenyen, to the Liseberg amusement park (Örgrytevägen 5, liseberg.com). The amusement park, which opened in 1923, has approximately three million visitors annually. There’s a botanical garden, horror maze, a number of arcade parlours, a host of various shows, and over 30 different rides – the standout being the Balder, a sprawling wooden rollercoaster on which speeds of 90 km/h can be attained. Some things that had the ability to travel even faster, are now permanently stationed in the Volvo museum (Arendals Skans, volvomuseum.com). It traces the development of the 1927-created Swedish car – and buses, trucks and other branded commercial vehicles – from the classic models up until the present.

Begun in 2007, the metropolis’ yearly LGBT+ super-event, which is an arts and culture festival, is called West Pride (westpride.se). Its vision, “is to live in an equitable and inclusive world free from prejudice and discrimination”. To this end, every June their extravaganza – tens of thousands attend – includes concerts, films, readings, parties, workshops, and the colossal Rainbow parade.

However, due to its size (population of 570,000 – the second highest in Sweden), to expect this municipality to have a massive gay scene is as logical as thinking that King Kong isn’t big where it counts. Nevertheless, there are some unmissable watering holes and shindigs. LGBT+ – friendly Haket (Första Långgatan 32, linnestaden.nu/Haket) is a cosy pub and eatery – they serve scrumptious grub such as burgers, sandwiches, vegan dishes and even sushi. As well as beer tastings, quizzes and karaoke, this place is ace for a fiddle; no, not that kind, they occasionally have violin performances.

If you want to shimmy and stomp your feet like never before, rock up to the mixed, non-heterosexual blowout, Club Queer (in the venue Park Lane, Kungsportsavenyen 36, clubqueer.se). Normally held on the last Friday of each month, they gloriously entertain with pop, electronica and Schläger.

Alternatively, taking its first name from the 1930s Nordic sex siren that was Garbo, the two-level nightspot Greta’s (Drottninggatan 35, goteborg.com/en/gretas) is just as much of a legend. Inside, amid the wacky sculptures, funky lights and mirror balls, Swedes with features more chiselled than Mount Rushmore get hot and bothered to all kinds of tunes.

British Airways (britishairways.com) have regular flights to Gothenburg (GOT) from London Heathrow (LHR) and Manchester (MAN).

goteborg.com/en/lgbtq-gothenburg is a decent source for some basic info and facts.

Buy a Gothenburg Card (gothenburgpass.com) as it allows FREE entry to over thirty attractions – the Botanical Garden, Liseberg, Universeum Science Centre, the Volvo museum, etc – and a substantial saving on others. It’s Available in 1, 2, 3 (cost 695 Swedish krona – about £58) or 5-day options, with another of its benefits being a free hop-on and hop-off bus tour.