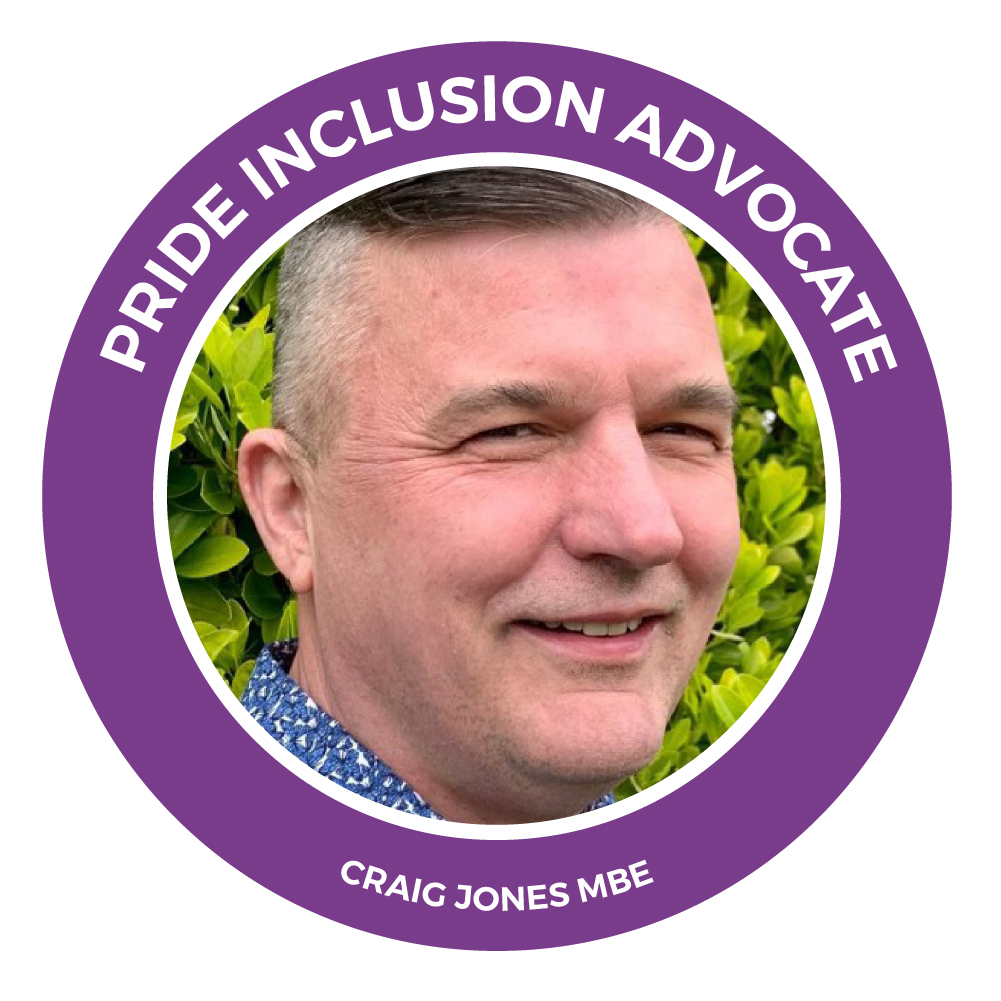 CRAIG JONES, MBE, IS THE JOINT CHIEF EXECUTIVE OF CHARITY FIGHTING WITH PRIDE (FWP), WHICH SUPPORTS AND FIGHTS FOR THE RECOGNITION AND RIGHTS OF LGBT+ VETERANS IN THE ARMED FORCES

Coming out in the Armed Forces on the day the ban was lifted must have been immensely challenging. Why did you make that leap?

When I walked through the gates of Britannia Royal Naval College Dartmouth on 12 September 1989, I knew that I had to leave an important part of who I am behind, because being gay was toxic, illegal and unacceptable to the Armed Forces back then. In the years that followed I watched scores of talented LGBT+ members of our Armed Forces marched away towards cruel investigations at the hands of the Royal Military Police and, in many cases, imprisonment. As I watched them being expunged, I stood in solemn silence; I could do nothing to help them. Nothing I would do or say could have eased their burden or changed their future, the best I could have done was to throw my career on the same fire. In the years that followed I became the perfect storm, a young officer carrying the true values of our Armed Forces and angry at the incongruity and injustice of the ban.

As the Secretary of State for Defence announced the repeal of the UK Armed Forces “gay ban” on 13 January 2000, just a few yards down the road there were long faces in the Ministry of Defence at an unwanted and hard-fought policy change. My Commanding Officer was far from a modernist and in the months ahead we would lock horns many times. Through necessity he told a packed officers’ mess of the policy change a day before the House of Commons announcement.

My response was swift and instinctive. I stepped from my closet and claimed the ground which had been so hard fought. I stepped forward knowing of the difficulties I would face, as I battled to be my true self. On that day, I felt a burning sense of duty to match the courage of those who had fought for my right to serve in our Armed Forces. In my path was a hail of shrapnel in an Armed Force ill-prepared to accept me and my kind.

HOW DID THE LEADERSHIP OF THE ARMED FORCES REACT TO YOUR CAMPAIGNING FOR INCLUSION AFTER THE LIFTING OF THE BAN?

In the years that followed I defended my kind like a tiger, wounding far more senior officers with words and pen that was prudent. I suspect that admirals, generals and air marshals traded my letters and emails, grim faced, in the military clubs of London. I wrote campaign letters, leaked articles to the national press and broke Queen’s Regulations repeatedly, as I dragged a policy that “dare not speak its name” into the 21st century. Today I have found my peace with those immensely difficult and lonely years. There was not a moment then that I felt safe but neither was there a moment when I wavered or believed that our LGBT+ serving community was anything other than brilliant members of our Armed Forces and worth the fight.

As for campaign style, for many years I was a lone voice supporting a business case that few would pin their colours to. So many doors were locked shut and I bull-charged them! Today, where the diversity business case is proven, I have learned that much can be achieved by an honest discussion and more gentle encouragement. These days I take the opportunity to ask nicely and check if doors are unlocked before I hit ramming speed!

So why are you now campaigning for Armed Forces veterans?

Thankfully, today the United Kingdom, its people and our government are universally proud of LGBT+ members of our Armed Forces who serve with distinction at the front line of operations. These men and women are welcomed in their ships, squadrons and regiments and their careers thrive. They are defined by their military service, not their sexual orientation or gender identity and they are valued for who they truly are and for the contribution they make. Our LGBT+ serving members of the Armed Forces are protected by an Armed Forces Covenant, which offers a promise from our nation that those who stand in our protection in our hour of need, and their families, shall not go unnoticed in their hour of need.

Our issue is that in the years of the ban and in 22 years since the ban was lifted, the generations of veterans who stepped forward for military service to protect our peace and freedoms, have been treated with abject cruelty, the impact of the ban endures in their lives and they remain beyond the protections of the covenant and the Armed Forces family. My work and FWP’s work with serving and veterans communities of the Armed Forces will not be done, until those who uphold the covenant, have done their duty to those most affected by the ban.

How did Fighting With Pride come about and what does the charity aim to achieve?

I picked up my pen in 2017, as the editor of the anthology book Fighting With Pride, aware that this important history was fading in the nation’s consciousness and risked being lost forever.

I gathered a group of amazing veterans and serving personnel who I had met in my service life and we prepared to publish ten stories of the ban. The most distinguished, perhaps, of our group was Captain Professor Sir Michael Howard, Regius Professor of History at Oxford, who was awarded the Military Cross at Montecassino in 1943. In bold defence of the lifting the ban, Sir Michael wrote to the Permanent Under Secretary of State in 1995 stating that he felt the ban was illogical, at variance to changing attitudes and in conflict with the ethical values of the United Kingdom, which he had fought in war to uphold. I was privileged to meet Sir Michael in the weeks before the book was published and he told me much of his experiences in Italy, both in battle and – with a wry smile – otherwise!

As my team of writers neared our publication date, the 20th anniversary of the lifting of the ban, we were angered by the fact that organisations that upheld the notion that our veterans are a band of brothers, sisters and siblings had failed to offer friendship and support to a group of veterans who had been cast aside and that the government had made no meaningful apology or acts of reparation.  On that landmark anniversary of the lifting of the ban we formed the registered charity, Fighting With Pride, as champions for our LGBT+ Armed Forces Veterans.

In little more than two years since our team formed, Fighting With Pride has built the case for reparations for LGBT+ veterans and brought that case to Westminster. Nothing less than recognition and recompense will be acceptable for these remarkable veterans who met the challenges of military service and so many other challenges placed in their path.

In June 2021, with my Joint Chief Executive, RAF veteran, Caroline Paige, we gave evidence to the Select Committee on the Armed Forces Bill which would ultimately result in the government’s commitment to the LGBT+ Independent Review, announced on 19 January 2022. Our team is determined to bring an end of this long journey for recognition and reparation this year.

I have been greatly privileged to find myself at times in places whether there has been a cause to champion for those who have met the challenges of military service, but not themselves been cared for well. In the years of the ban, LGBT+ veterans fought their case alone. Today, FWP is being pushed along on its journey by hundreds of veterans and LGBT+ organisations who today recognise our wonderful LGBT+ veterans as the remarkable people that they are.

I cannot tell you what it means to our LGBT+ veterans to have their case held high by the whole community that they have fought side-by-side with in conflict.

I am proud to have had the chance to lead at the vanguard of work. In 2022 we must find an honourable future from this dishonourable war.