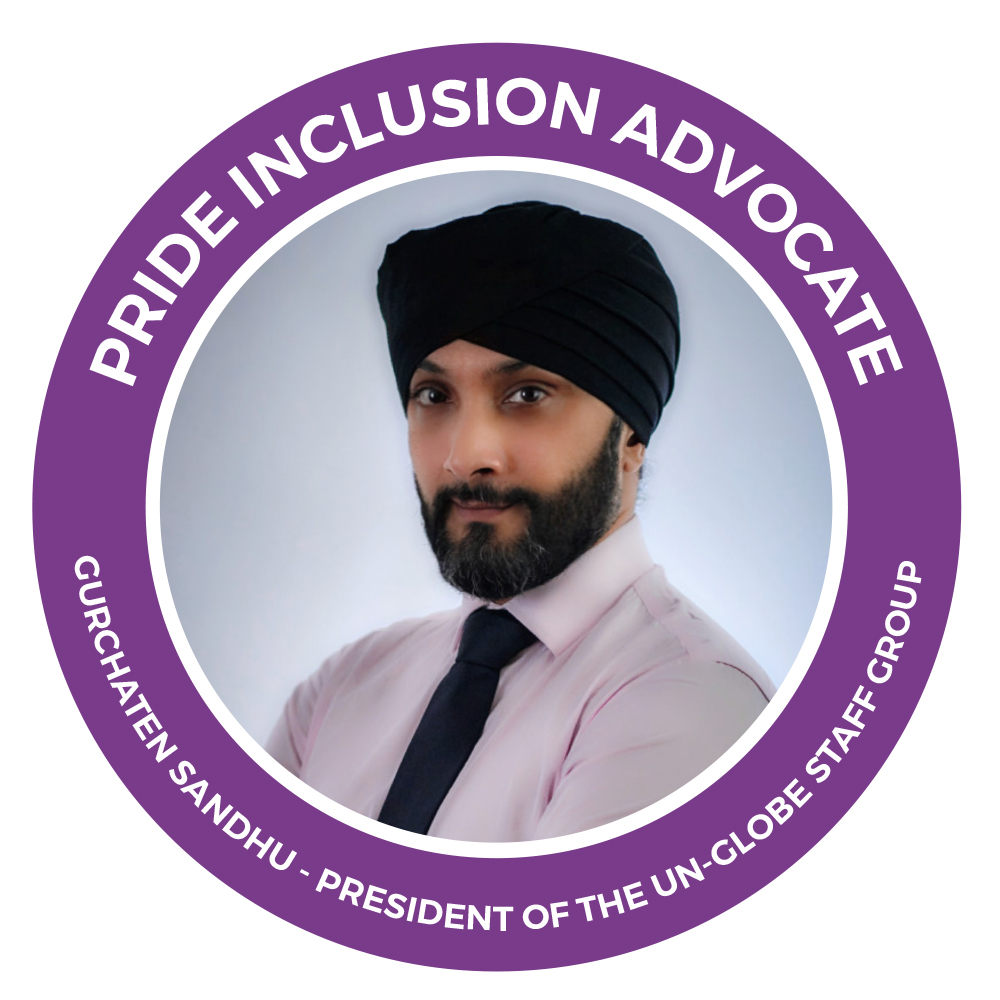 President of the UN-Globe Staff Group

You were born into an Indian Sikh family in the UK. What particular challenges did you face in coming to terms with your sexuality?
I grew up at a time when homophobia was rife both in the British and Punjabi communities: in fact, the word “gay” in Punjabi was hardly ever heard, because, like many things that were thought to be shameful, it was never discussed. I was about 13 when I became aware that I was attracted to men. When I realised these feelings had a name, I didn’t want to be gay. The worst thing for me, really, was that I continued to deny myself, even though I knew I was gay.

Growing up, I always wanted to be white, straight, blond-haired and blue-eyed. The opposite of everything I was. It was a constant internal identity battle, between who I really was and who I was told to be. This feeling of shame of who and what I was was amplified by feeling guilty for being ashamed.

I moved away from home and finally gave myself the freedom to explore my sexuality. Armed to the brim with toxic masculinity: misogynistic, homophobic and transphobic and repressing my emotions, I stepped out into the queer community! I thought I had come into my own: I had accepted being gay and was out amongst close friends. However, I was still struggling with deep levels of internalised homophobia. I would cloak my sexuality by dialling up my masculinity; I would pride myself on passing as straight; and I would avoid befriending very feminine men. Deep down inside, I still wasn’t OK with being gay.

It wasn’t until I plucked up the courage to see a psychologist and face my demons that things started to get better. Seeking help was the beginning of the making of me: my psychologist helped me unpick and unlearn all that hate and homophobia I had internalised.

How important do you think being “out” at work is – not just for the individual but also for the organisation they work for?
Coming out in in a large organisation such as the UN is not easy, especially for people of colour and from diverse religious background. Not everyone can be open and it shouldn’t be expected either from society. Our lived realities are different from each other. Is it safe to come out? How do we express our multilayered identities when culturally we prescribe to heteronormative narratives? In such circumstances, we must talk about “coming in or letting in.” By letting in, we are inviting a person into our space and sharing our sexual orientation, gender identity, and/ or sex characteristic. In this way, it is not about seeking validation or approval it is about acceptance.

You are President of the UN-GLOBE staff group. What does UN-GLOBE do?
UN-GLOBE was established in 1997 in response to the need for better information and knowledge exchange about issues in the UN among LGBTIQ+ people. UN-GLOBE’s goal is simple; the inclusion, equity and non-discrimination of LGBTIQ+ people in the UN System and its peacekeeping operations. To achieve this goal, UN-GLOBE advocates for inclusive and equitable employment conditions; diverse, safe and enabling working environments and cultures; and, lastly and more importantly, the representation and engagement of LGBTIQ+ people. “Nothing about us, without us” is part of UN-GLOBE’s DNA.

What we do at UN-GLOBE is central to making the UN a diverse, thriving and inclusive workplace. Without UN-GLOBE the process to make a multilateral institution truly LGBTQI+-aware would have been slow, and, dare I say, even daunting.We have not just changed policies, we have brought about cultural changes. When people come into the UN from different cultures and backgrounds – chances are they may have been told that identifying as a LGBTIQ+ is wrong or can be punishing to their career. We are working to dispel such prejudices in the UN. Just because it is the UN, one buys into the myth that everything must be right. Like any other organisation, we too have our challenges.