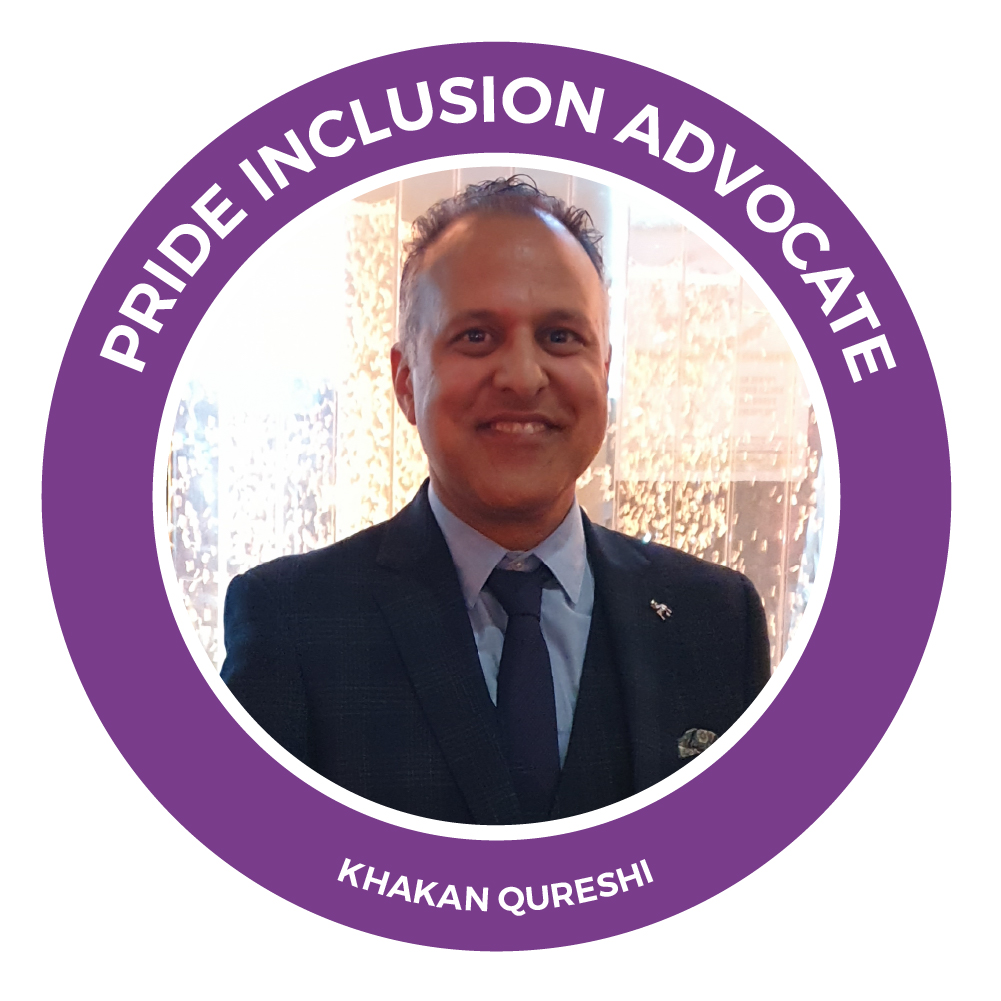 KHAKAN QURESHI, BEM, IS THE FOUNDER OF FINDING A VOICE AND IS A SENIOR INDEPENDENT LIVING OFFICER SUPPORTING YOUNG AND HOMELESS PEOPLE. HE HAS RECEIVED NUMEROUS AWARDS INCLUDING A BEM FOR HIS WORK CHALLENGING HOMOPHOBIA WITHIN SOUTH ASIAN COMMUNITIES AND ISLAMOPHOBIA IN MAINSTREAM COMMUNITIES

What is your professional background?

I currently work for Midland Heart, one of the largest Housing Associations in the Midlands, as a Senior Independent Living Officer, managing a team of staff who support young, homeless people. My background is in Health and Social Care.

You are an LGBT+ activist and Founder of Birmingham South Asians LGBT+ – Finding A Voice, an independent, organisation for South AsiaN LGBT+ people. What does the organisation do?

Finding a Voice is to encourage, empower and support South Asians LGBT+ to be their authentic selves and to educate others against homophobia, biphobia and transphobia. We have had monthly social meet-ups, which include dining out and watching films, discussing topics of interest and exploring issues which have affected us as South Asian LGBT+. This includes supporting predominantly gay Muslim men, asylum seekers and refugees.

Finding A Voice co-ordinated the inaugural South Asian LGBT+ Conference in 2018, in partnership with British Asian LGBTI+ and the first LGBTIQ+ Intersectionality and Islam Conference in 2019. Since Covid, Finding A Voice has been on a hiatus, though still offers online support and is currently communicating with the Queen Elizabeth Hospital in Birmingham to re-start the monthly meet-ups.

It can be argued that we have come a long way in terms of LGBT+ rights. What more needs to be done particularly in the South Asian community?

I think the Equality Act, same-sex legislation and RSE education needs to be reinforced with the South Asian community. I know there are some South Asians who accept the LGBT+ community but there are still many who will reject anyone who identifies as being part of the LGBT+ community or question their sexual orientation or gender identity. One of the main challenges is to try and have conversation with religious or faith leaders and teachers about what it means to struggle with being your authentic self and being able to express it in a way which is culturally acceptable. This will also involve sensitive discourse about how rejection impacts on the individual who is seeking validation, love of the family, and solace/ support.

Religious, cultural, traditional and familial pressure will also need to be addressed as this is intertwined in the upbringing of the individual who is considering or wants to “come out”. The change in the dynamics of the family unit can be detrimental to the individual and lead to conversion therapy, forced marriage, or being disowned or ostracised.

Having an education, positive role models and representation and sharing positive narratives of South Asians LGBT+ can shift attitudes towards a more inclusive South Asian community. Activism and campaigning in different language formats can also spark a conversation for change.

As a Muslim you came out as gay. Are there any challenges a gay Muslim faces which others of different faiths may not encounter?

Gay Muslims seem to face more pressure from the family to conform to heteronormative standards of what is acceptable behaviour, a palatable life, or lifestyle. This tends to stem from religious indoctrination, which is a misinterpreted version of verses in the Qur’an. We are almost always taught from a young age that homosexuality is a sin but there is absolutely nothing in the Qur’an which states this is the case.

Many Muslims, from varying backgrounds, will state you cannot be gay and Muslim and reference the Story of Lot to prove a point. But they conveniently omit the other themes and issues discussed within the story. When faced with such prejudice and bigotry, it can be very difficult to navigate the conversation so there is better understanding, especially on social media.

Family and community are integral to the individual and how they interact with others. Most of the time, respect for elders transfers to secondary thinking i.e.: “If I did this, what will others think?”  Muslims are also drip-fed that sinful actions can lead to negative repercussions, either in the here and now or the hereafter. So, the added pressure is religious guilt and shame.

However, there are some gay Muslims who are able to reconcile being LGBT+ and have a faith or religious affiliations and manage to lead happy, autonomous lives with or without the blessings of the family or wider community.

I rise at 5.30am. My partner brings me breakfast in bed. I watch Breakfast News to start the day before getting out of bed at 06.00am. I get ready for work. I take about one hour to travel to work, which starts at 08.00am. The working day varies as I work with a diverse range of young people who present a range of issues and behaviours, and staff are supported to meet their needs.

Sometimes I finish work at about 6pm and make my way home, to a nice, home cooked meal. I then check my emails and messages to see if there is anyone from the South Asian LGBT+ community who is seeking, or in need of, support. The correspondence I receive is not exclusively South Asians LGBT+ as I also receive communication from students, media requests and organisations which are looking for LGBT+ Muslims who can share their personal experience or observations on what it means to be LGBT+ and Muslim.

On a personal or professional level, what has been your proudest achievement?

On a professional level, I’m proud of setting up Finding A Voice in 2014, which was the first voluntary-led organisation for South Asians LGBT+ in Birmingham. Without any financial resources, I have managed to run the group and co-ordinate two SALGBT+ conferences which were ground-breaking in that they highlighted the various issues and challenges faced by South Asians/ Muslims LGBT+

How would you describe yourself in three words?