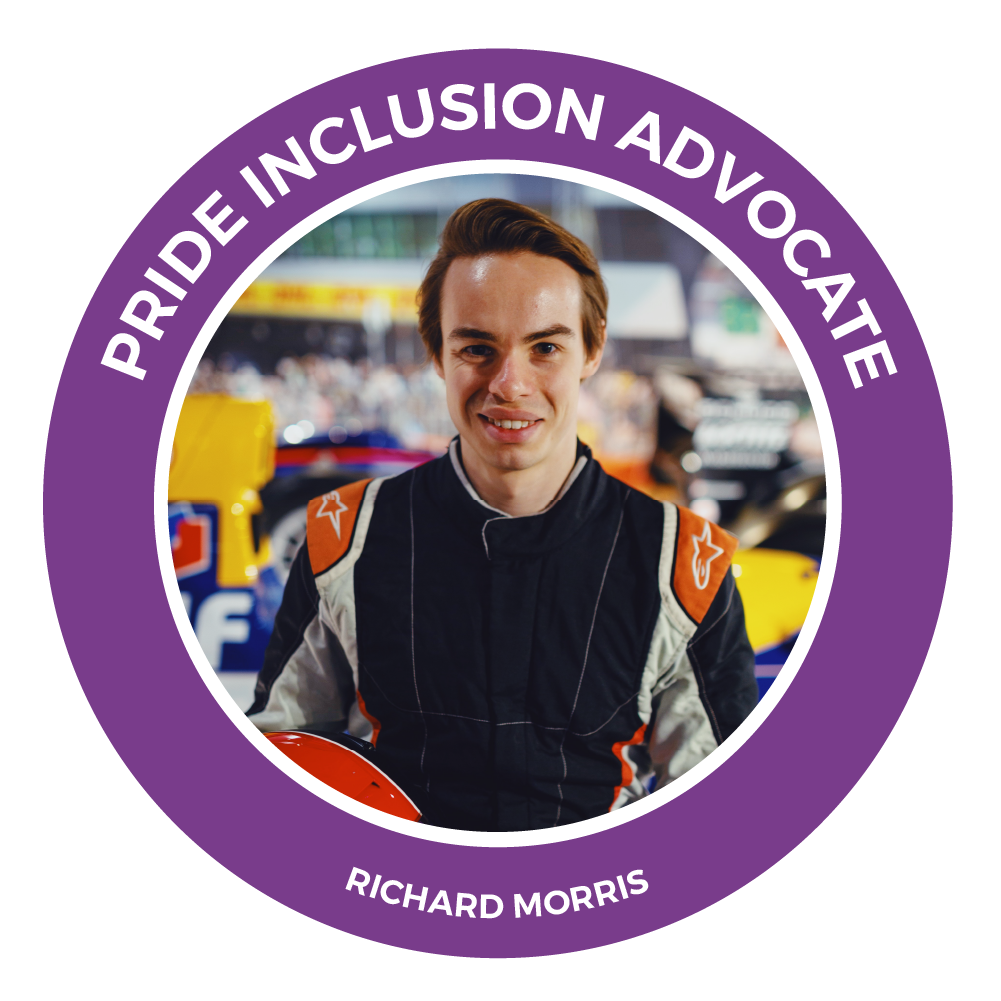 You describe yourself as being committed to championing the LGBTQ+ community both on and off the track and you co-founded Racing Pride. What does Racing Pride do?
Racing Pride is about promoting LGBTQ+ inclusion through motorsport. We provide a mix of visible representation, education, and community. Motorsport, like many sports, has had very little by way of LGBTQ+ role models who are out and happy to talk about it while being active within the sport. So an important part of Racing Pride is having ambassadors – current racing drivers (of which I am one), but also engineers, mechanics, marshals, officials, volunteers, and people in motorsport media too. These ambassadors show that you can be LGBTQ+ in the sport and be successful. By telling their stories they break down stereotypes, highlight issues, create empathy, and, hopefully, inspire others.

We provide education in the form of resources on allyship that anyone can access via our website, as well as things we put out on social media, and by working in depth with teams, companies and organisations across motorsport, the automotive industry, and more broadly. We deliver talks and workshops, review policies, and suggest best practices for creating inclusion. Ultimately, too, we are very conscious of creating a community of LGBTQ+ people and allies. We run regular “Spotlight” pieces on our website interviewing LGBTQ+ people from around the world at all different levels of motorsport and in different roles, sometimes published in multiple languages. d whether as participants or fans.

I personally love representing and championing the LGBTQ+ community on and off track. When I race I have the Racing Pride logo proudly on my car and overalls, and I have been known to literally fly the Progress Pride flag on the podium for example. I also give lots of talks, workshops, and attend events representing Racing Pride. For me it gives a great sense of meaning and purpose to my racing career that goes beyond just winning races (although I certainly do love winning!).

How important do you think it is to be out – both in the sporting world and in the workplace?
When it comes to particular individuals I would always say it’s up to them and not to feel pressured to come out. Different people have different circumstances which make it easier or harder to come out in different areas of their life. It’s not about being brave or being a coward, and I wouldn’t pressure anyone to do it when it doesn’t feel right for them. What I would love to see, and to be part of creating within my own sport and industry especially, is a world where everyone feels able to be out – knowing that they would be safe and respected if they came out.

Having said that, if you do feel able to be out – in the workplace, sport, or just life in general –that can really help others around you.You can become a role model, help to start conversations, which I think is important because often when people start to discuss and think about these issues they become better allies, and create understanding and empathy. Often intolerance and stereotypes come from ignorance but once people know somebody who is LGBTQ+ that understanding can start to develop.

In the sporting world I do genuinely believe it’s powerful when athletes and other figures in competitive sport come out. Sport has a phenomenal reach globally and socially, and people connect with it in a very emotional way; they follow their heroes, their teams, and so on. So if sportspeople start to talk about their experiences of being LGBTQ+ or their support as allies for LGBTQ+ people that will help create a positive image of the LGBTQ+ community among their fans, educate people, and help to get rid of negative stereotypes. Sportspeople have an incredible platform so I think it’s essential for us to use it in the best way possible.

How easy is it to be LGBTQ+ in the world of motorsport? Did you encounter any problems?
Honestly, initially I didn’t find it easy. I started out karting for the first time at 12 years old, and I was taking it seriously by 14. That time I was getting into the sport was also when I was becoming aware of being LGBTQ+ and figuring that out.

One issue for me was that there weren’t any other LGBTQ+ people I knew in the sport and there weren’t any role models I could look up to. F1 hasn’t had an out driver in decades, and even then they weren’t publicly open about it. It’s similar across other world championship level racing disciplines. All the images I’d been fed around motorsport showed racing drivers as very different people to who I was, so I worried if I could fit in, even though I was certain that I loved the sport. I also heard things around racing paddocks – just casual, unthinking use of homophobic terms – which reinforced that, and one time there was an incident where homophobic words were written on my kart before a race. So for a long time I kept it pretty quiet other than to a few people close to me – I wasn’t out publicly in the sport or even to everyone in my own teams.

However, I also always thought I knew, and I haven’t been disappointed in this since coming out more openly, that the vast majority of people in the sport want to make it an inclusive one – they all love racing and want to share that with everyone. The issue has been that people don’t necessarily know how to show that support for LGBTQ+ people when it normally isn’t really talked about. That, combined with a desire to finally be able to be fully myself while doing the thing which dominates my life, is why I came out and then started Racing Pride: to give people visible role models, spread some knowledge and awareness, and, importantly, provide people with a way of showing support. The positivity of that approach, I think, is why it has taken off the way it has. It wasn’t at all easy to come out publicly to my motorsport following – my hands were literally shaking when I posted about it on social media the first time – but I’m so glad that I did.

It’s been amazing to have people approach me at tracks, or message me, to say that Racing Pride has helped them to feel able to come out, to feel represented, or to feel more welcome coming into the sport. Being able to make a difference to people around me and people I’ve never met in countries I sometimes haven’t ever been to personally is the most incredible motivation and makes all of the time spent on Racing Pride worth it.

In the past few years we have seen great advances in LGBTQ+ rights both in the workplace and in the wider community. What else remains to be done?

There certainly have been, broadly speaking, some big advances for LGBTQ+ rights, especially if you’re comparing with decades ago. I remember celebrating when same-sex marriage became legal in the UK, for instance. There is also a much more mainstream discussion of LGBTQ+ rights and a greater willingness to engage with issues impacting the LGBTQ+ community here in the UK now.
However, we’ve also seen that those rights and gains are hard-fought and need to be defended as well as advanced. We can’t just assume that progress will be linear, or will continue unless we keep pushing for it together with allies. There are still really troubling incidents of hate crime, which is arguably increasing here and in other places, we’ve seen repressive legislation introduced by the government in Hungary just this year, and trans rights both in sport and in the broader community are under threat in a lot of places around the world. We also need to make it clear that pink-washing from organisations isn’t good enough and that it’s real actions which matter.There are still too many people who don’t feel that they can be out in the workplace or in their day-to-day lives, or who find that coming out process difficult and stressful. There are still very few people out in elite sport, particularly if you look at male athletes. Women’s sport does have more openly LGBTQ+ participants, but also has issues around trans inclusion. In motorsport there are still extremely few openly gay drivers and we don’t have role models racing at the very top of the sport – of course, I hope, with the right support behind me, I might be able to get there myself!
Above all what we need to do is turn the willingness that there is to show support and to engage with issues into education and understanding, and then to build on that foundation to create everyday cultures, legal frameworks, and social norms built on equality, inclusion, and respect.

What has been your proudest achievement?
In terms of my sporting achievements on track it’s really tricky to pick out any one particular moment as the proudest – probably because I’m always looking forward to what I want to achieve next.

What does stand out, though, is when Racing Pride secured our partnership with Aston Martin Cognizant Formula One Team. That was the moment when I knew we had done something really special; something which would have an impact across the world, which would mean so much to so many fans as well as participants, and which would leave a permanent, and very positive, mark on Formula One and motorsport – the first team to have a meaningful public partnership centred on promoting LGBTQ+ inclusion. Since then we have seen some scenes which we had never seen in Formula One before, such as Pride flags on the Aston Martin cars, and statements of solidarity with, and protest on behalf of, the LGBTQ+ community from Lewis Hamilton and Sebastian Vettel when Formula One raced in Hungary in the summer. There’s a lot more still to be done, even just within our sport, but we really are making change and progress happen.