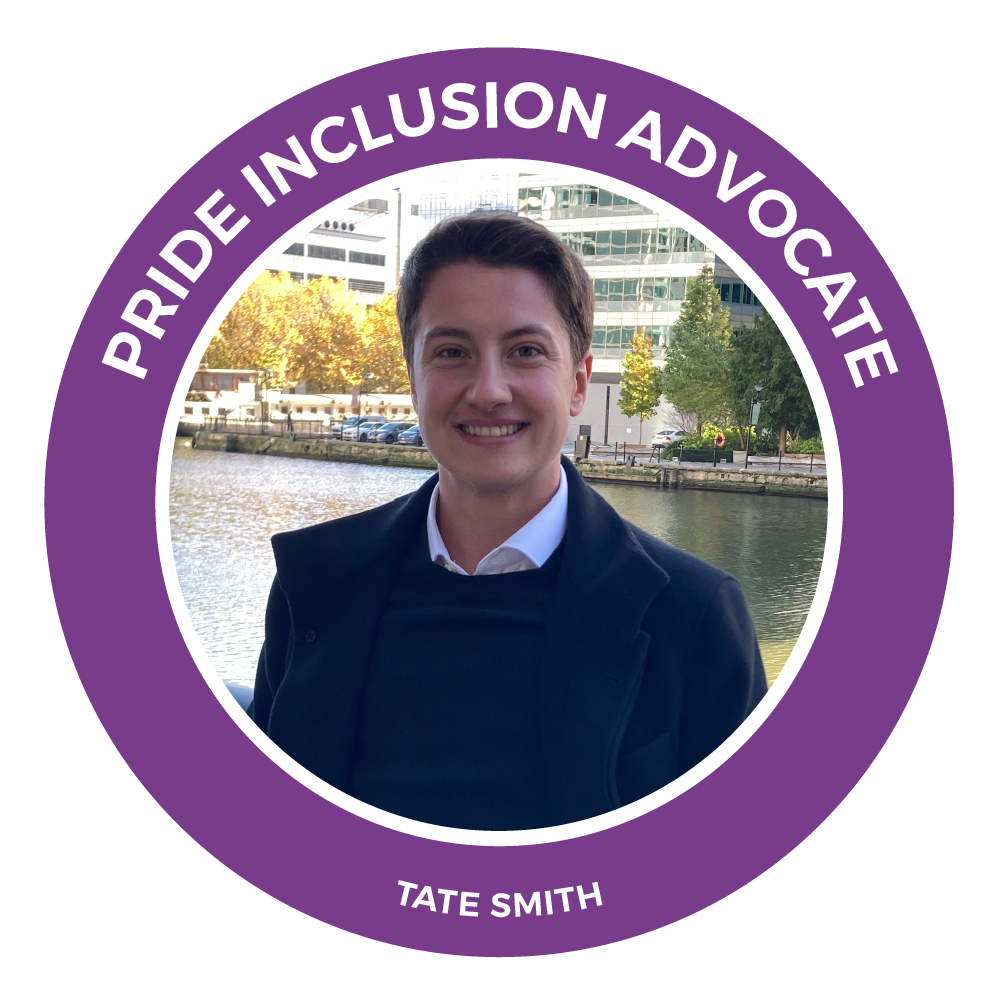 You’re a Programme Support Officer at Clifford Chance. What does your role involve?
I’m currently on secondment from my secretarial role to a project management support role, supporting Senior Project Managers to deliver a multi-stream programme of works and business critical and strategic activities. It’s very different from what I’m used to but I’m really enjoying it.

How did your colleagues react to your transitioning?
Very well! I didn’t expect any different since our firm has done such fantastic pro bono work for the LGBTQ+ community including the X Passport case. I joined the firm when I was only three months into my medical transition and didn’t come out until a few months after that and everyone has been incredibly supportive, respectful and never made a big deal out of it which is really important to me. It’s important that I go through my working day as just Tate and not be defined by my trans identity which is what my colleagues do. I’m lucky that I have such a fantastic support network built from our LGBTQ+ network which really gave me the confidence to bring my authentic self to work.

You also describe yourself as a trans activist. What does that involve?
I see my being out and open as a gay transgender man as activism in its simplest form but I have developed my own style of activism where I speak at many corporate organisations, charities, student societies and to the media about what it’s like to be trans. I raise awareness to topics such as the difference between gender and sexuality, the effects of testosterone, intersectionality, family and workplace acceptance, toxic masculinity and male privilege. My favourite way to do this is by hosting a “lunch and learn” where people can come along for an hour, listen to my story, and then I finish with an open Q&A and terminology session which I’ve found very successful. It’s very important to me that transgender people are visible, especially trans men, and that I educate people and debunk common myths.

It can be argued that trans people are becoming more visible and accepted by society. From your experience is that true? And what challenges remain ahead?
To an extent, yes. There’s much more documentaries, press coverage, media representation and conversations being had around the trans experience, so visibility is increasing. I agree that we are being more accepted by society but the journey is far from over. There is a lot of anti-trans hate being spread amongst news outlets particularly focusing on trans women being predators and the infamous transgender bathroom debate. The government seems to be obsessed with trans people’s bodies and still won’t help us access the healthcare we need.

I still feel that trans men are not as represented and personally I don’t feel entirely accepted by society. It’s a scary time to be a trans person right now but at least with my activism I can shed the light on trans joy and how proud I am to be a transgender man.

On a personal or professional level, what have you been proudest of?
Personally, moving out, leaving my unsupportive family, and funding my medical transition with my own money. Professionally, delivering Clifford Chance’s first “lunch and learn” with an openly transgender person to 50 people at the top of our office overlooking Canary Wharf. It was significantly oversubscribed with people queuing outside and that made me feel very special.