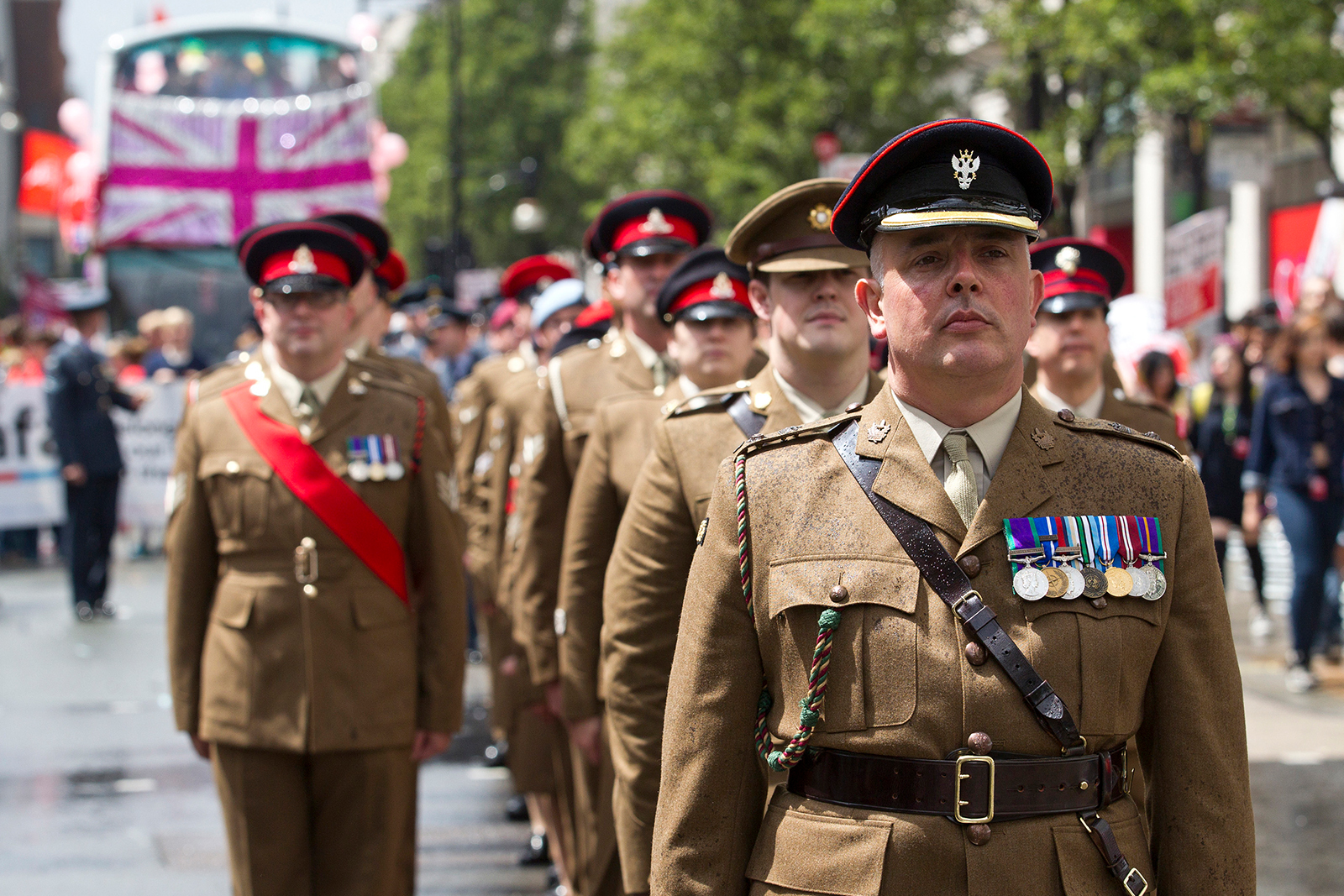 In January 2015 the head of the Army, General Sir Nicholas Parker, spoke about the need to secure the widest possible talent for the Army of the future by ensuring that the Army has a career structure in which everyone can fulfil their potential and a culture where everyone can thrive, regardless of ethnicity, gender or sexual orientation.

The Army has come a long way since 2000 when the ban on homosexual personnel serving was lifted and in 2016 the Army achieved its highest ever position in the Stonewall Top 100 employers of LGBT+ Personnel.

The progress from total exclusion to celebrated inclusion has been attributed to the leadership provided by the Army’s LGBT+ Champion, Lieutenant General James Everard, and the role of the Army’s LGBT+ forum.General Everard is a visible and vocal ally to the Army’s LGBT+ personnel and as one of the Army’s most senior officers he ensures that they are supported and encouraged to thrive throughout the organisation.The LGBT+ forum is proactive in holding the Army to account for its policies and practices and, by championing inclusive leadership, improving the lived experience for all.

IN MAY 2016 GENERAL JAMES WAS AWARDED THE CORPORATE STRAIGHT ALLY AWARD AT THE BRITISH LGBT+ AWARDS.THIS WAS RIGHTFUL RECOGNITION OF A VERY SUCCESSFUL FIVE YEARS AS ARMY LGBT+ CHAMPION.

“When I joined the Army in 1983 Lesbian and Gay officers and soldiers lived in the shadows. Homosexuality was decriminalised in the UK in 1967, yet it remained an offence in the Armed Forces. Why? There was certainly a fear of the unknown. And no-one in authority was prepared to put their head above the parapet for the tricky causes of sexual orientation and inclusiveness. The organisation simply failed to challenge the view that homosexuality would reduce operational effectiveness and recruiting. And so these individuals lived in fear of exposure and humiliation, a recipe for unhappiness and an easy target for the bully. Not a good place to be.

And then, thanks to the courage of a small band of determined men and women, and the excellent work of Stonewall, the ban was lifted in 2000. And we discovered that….all those fears were unfounded and the siren voices rapidly evaporated. I do not remember an earthquake as the policy changed, but simply a sigh of collective relief that the dark ages were behind and that the inclusiveness journey could now start for the Army. This journey continues today as we (and I would flag up the role played by the LGBT+ Forum, but also recognise the part played by chain of command) have worked to promote an environment in which our LGBT+ community feel supported and valued – and achieve all that they set out to achieve in uniform. And after a hesitant start as we put our policies in place and changed attitudes I think we have done well. Coming out must always be a matter of personal choice, but more men and women now have the confidence to do so. What would I say to someone considering coming out? Look at those who have gone before you. They are living their lives with a joy and freedom that they find empowering and it is good to see.

As Patron of the LGBT+ Forum life is simple. I am in their corner. I will fight for our cause. I will demonstrate support with my time and my energy. I will act as a straight ally and provide leadership as and when it is needed. I do fear that when we discuss leadership we too often leap to talking about the exceptional warrior-monk or extra-ordinary soldier-scholar. Interesting, even informative, but not that helpful because we all need to be leaders in the Army today.And the work that we are now doing on developing a Leadership Code based on transactional and transformational leadership will help to ensure that we all coached to live by the Army values and standards. This will be a step forward.

I am proud that the Army has done so well in the Stonewall Workplace Equality Index, with an upward trajectory that we will work hard to sustain. But I am prouder to see the list of LGBT+ role models growing. Long may it continue as a metric for success.

MAJOR ROB RIDLEY JOINED THE TERRITORIAL ARMY WHILST READING CIVIL AND COASTAL ENGINEERING.AFTER TWO YEARS AS A RAILWAY SITE ENGINEER HE JOINED THE REGULAR ARMY, COMMISSIONING IN TO THE ROYAL ENGINEERS IN 2002, TWO YEARS AFTER THE RESTRICTIONS ON LESBIAN, GAY AND BISEXUAL MILITARY SERVICE WERE LIFTED.

Rob’s career as an engineering officer has been typically diverse. Initially delivering engineering on combat operations, he led artisan teams in Bosnia&Herzegovina, Germany, Canada, Cyprus and Jordan. Qualifying as a Bomb Disposal Officer, he has been responsible for coordinating Bomb Disposal teams in the UK, Kenya and Afghanistan. Deploying to Iraq, he was responsible for management of an engineering team, over one hundred strong, who successfully conducting projects in support of local governance and sustainability of the Southern Iraqi marsh lands. Whilst reading a second engineering degree, he was seconded to the Australian construction industry, first to a major jetty construction project, then a railway tunnel design team, after which he qualified as a Chartered Civil Engineer. He now provides military engineering consultancy across the Ministry of Defence.

Rob’s experience of coming out in a very close knit organisation has been refreshingly positive. Realising that his soldiers suspected and were unconcerned, Rob started coming out whilst serving in Germany. ‘”Started” as continually moving upwards, military personnel effectively come out every few years. “It gets easier every time. The response has been overwhelmingly relaxed and, especially amongst younger personnel, curious.” Rob has even been told that being a gay officer has made his fellow officers slightly ‘cooler’! He strongly believes that inclusive teams enable personnel to live authentically, not dedicating effort to hiding aspects of their identity, which maximises their performance. “On military operations inclusive leadership is not simply the right thing to do; it can be a matter of life or death.”

Rob has recently been appointed as Chair of the Army’s LGBT+ Forum, an active employee network for LGBT+ soldiers and diversity allies. Led by soldiers and officers from across the Regular and Reserve Army, the Forum advises Army policy staff and commanders on the lived experience of LGBT+ soldiers, supporting the development of inclusive policy and provides advice, support and mentoring for LGBT+ personnel. Rob’s personal aim for the Forum is to see it run out of work, as it will signal that the LGBT+ personnel are fully understood and accepted. “There’s still work to do, no employer can claim their diversity and inclusion journey is complete, but the Army understands where it stands and is in many cases, naturally, leading the way.”

Proud of the revolution in attitudes towards diversity in the Army, especially in the sixteen years that gay service has been allowed, he believes “It used to be that soldiers would stay in the closet on joining for fear it would harm their careers. Encouragingly for our future, particularly amongst junior personnel, being open about sexuality and gender identity is seen more and more as a question of authentic leadership and integrity.”

Rob’s advice to LGBT+ personnel: “If in doubt, come out, you are a better soldier when you are comfortable being yourself.”

HANNAH WAS SPONSORED BY THE ARMY TO ATTEND NEWCASTLE UNIVERSITY WHERE SHE READ ELECTRONIC ENGINEERING BEFORE COMMISSIONING FROM THE ROYAL MILITARY ACADEMY SANDHURST INTO THE ROYAL ELECTRICAL AND MECHANICAL ENGINEERS (REME) IN 2010. IN 2013 HANNAH CAME OUT TO HER CHAIN OF COMMAND AS A TRANSGENDER WOMAN AND BEGAN THE TRANSITION PROCESS FROM MALE TO FEMALE.

In the first five years of her career Hannah has experienced a diverse range of jobs and roles, enjoying postings both in Germany and England.As a REME Officer she has been responsible for groups of soldiers providing maintenance and repair for the Army’s equipment including, in her current post, the Army’s Challenger 2 Tank fleet.She has deployed overseas to Afghanistan, Kenya and Canada providing equipment support in austere and demanding environments.

Hannah’s experience of coming out in the Army and conducting her transition has been overwhelmingly positive.She cites the success of her transition on two key aspects: “From a work context my transition has been easy. Firstly, the Army has had a policy for dealing with transgender soldiers since 1999.It is a simple, clear policy that explains the support to the individual, those around them and the organisation they work for.Secondly the Army is a people-based organisation.It cares about its people because its people are what makes it one of the best armies in the world. From my superior’s point of view, if it was important to me then it was important to them.”

Her transition in work surprised many soldiers but after a couple of weeks of interest and adjusting to the new pronouns (Ma’am, she, her etc.) it became old news and life resumed as normal.“As an officer I have responsibilities to my soldiers and as long as I continue to meet those responsibilities I will maintain their respect.The fact that I am Trans isn’t a factor.First and foremost I am a soldier”.

In addition to her normal job, Hannah plays an active role as the Transgender Representative for the Army LGBT+ Forum.In this role she provides personal advice and support to serving transgender personnel and potential recruits, conducts training for Army units and advises on transgender policies, making sure they are fit for purpose.Outside of the Army she is an Ambassador for LGBT+ Sport Cymru and she conducts Role Model interactions with Mermaids, a charity that supports gender variant children, teens and their families.

“Mermaids is a charity that it very close to my heart, a fantastic organisation that provides life-saving support to extremely vulnerable people,They do this on a voluntary basis and I have witnessed first-hand the positive impact they have had on people’s lives.”

For more information on Mermaids go to: www.mermaidsuk.org.uk

More information on the Army’s LGBT+ forum is available at www.armyLGBT+.org.uk

Information on full time and part time roles in the Army is available at www.army.mod.uk