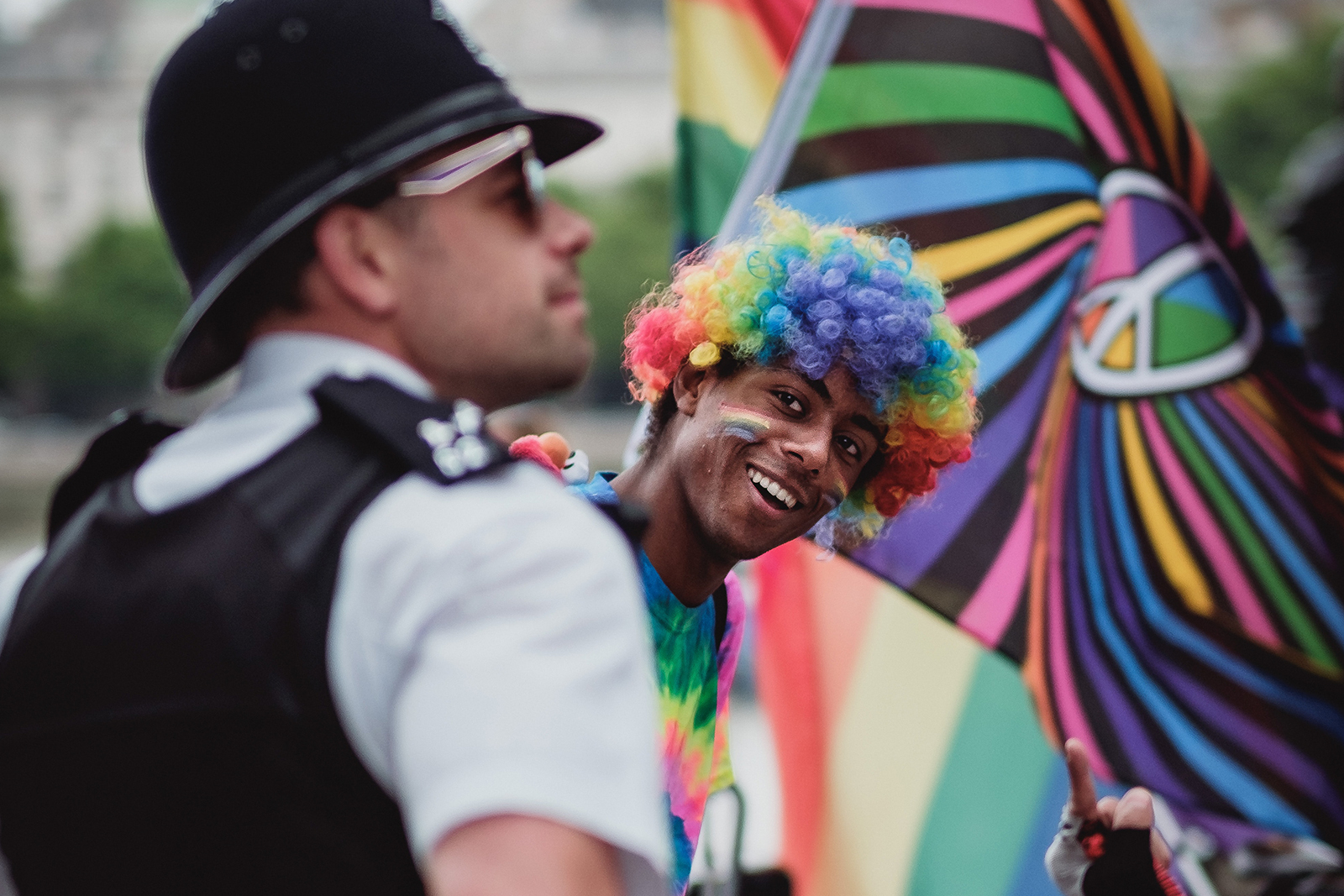 Ten years of Pride at Norton Rose Fulbright: what we’ve learned on our journey

Barry, you have been the Head of Diversity & Inclusion at British Transport Police since 2013, as well as being on the Board of the Institute of Equality and Diversity Professionals. What do these two roles involve?

Both of these roles are very similar in some ways, but very different in others. As Head of Inclusion & Diversity for British Transport Police, my role is very varied with no two days ever being the same.One day, I could be researching and writing some new guidance about how to support non-binary and gender-diverse individuals, and the next I could be actively supporting a victim of hate crime or engaging with communities about the impact of wearing face masks for those with a disability or who are neuro-diverse. I also have a strategic role providing advice, guidance and recommendations to officers and staff on a daily basis on all aspects of equality, diversity and inclusion in policing.

As a Board member for the Institute of Equality & Diversity Professional (IEDP), I help to influence and guide the IEDP in its work and the products and services that it offers to its members. Being on the Board of Directors also really helps me in my work in policing, as I have access to a huge range of different communities and other experts working in very different industries to me – from retail to professional or legal services and everything in-between. Everyone has their own individual areas of expertise, and I’m grateful to have the opportunity to learn from the very best.

How important is Diversity & Inclusion for the successful running of both a company (not just British Transport Police) and the well-being of individuals in its work force?

Before I answer that, I would stress that diversity and Inclusion are two different but very much connected areas. Having a diverse workforce is necessary to be able to police with the consent of the public that we serve. To police effectively in the UK, we need to be representative of the public and be able to recognise and understand the incredible diversity of the UK’s population and their very distinct needs.

However, creating a diverse workforce is not achievable or sustainable in and of itself and that’s where inclusion plays a vital part. We can only attract and retain that diverse workforce if we have inclusive workplace practices and a culture that actively values those differences. It makes good business sense, of course, (we want to employ the very best!); but not only that, it increases confidence in our understanding of diverse and sometimes vulnerable communities. After all, a transgender police officer is much more likely to understand the impact of crime on transgender communities, and the concerns and fears that the trans community experience. We really need and value that type of insight. By providing that inclusive and welcoming environment, we know that our people are happier as, ultimately, they feel valued for their difference and don’t need to hide a part of their identity to “fit in”. The same principles will apply in any industry as they’re not just specific to policing!

You have been named a Diversity Champion. How do you go about creating a welcoming and inclusive environment for your staff?

I’m incredibly proud to work for a police force that doesn’t just accept me for who I am, but actively supports me and provides an inclusive work environment where everyone is welcomed and accepted for who they are too.Not having to make the enormous effort of hiding my sexuality has really helped me in my career and it’s exactly that environment that I want to create for everyone else, no matter their background or identity. I know it’s helped me to flourish so I will always encourage anyone to be themselves and to be authentic; as I am every single day.

However, I know that’s not always so easy for everyone. That’s where I have a responsibility to seek out those individuals who may struggle to feel “welcome” or accepted for who they are and look at what I need to practically do to help or remove any barriers. This could be by educating colleagues, or by creating and implementing new policy and practice, but the ultimate goal is to create an inclusive workplace where everyone is valued and welcome. I’ve always said that the easiest way to create inclusion is to talk about equality, diversity and inclusion matters constantly and at every opportunity; removing the taboos, misinformation or fear of those who may not understand something but are too afraid to ask for help in understanding. It’s important to encourage honest and open conversations about topics as diverse and ‘uncomfortable’ as pronoun usage, microaggressions and the menopause to name just a few!

The ultimate goal is to create an inclusive workplace where everyone is valued and welcome.

On a personal level what has been your proudest achievement as the Head of Diversity & Inclusion?

In June 2018, I was one of two members of police staff representing police forces from the UK at the European LGBT Police Association (EGPA) conference in Paris, France. Over 180 delegates representing 17 European Union countries were present, with me joining the 40-strong delegation from police forces across England, Scotland, Wales. During the conference, I was honoured to join our French police colleagues at a ceremony to revive the “Flame of the Nation” and to lay wreaths under the Arc de Triomphe at the Tomb of the Unknown Soldier.The ceremony was in remembrance of all the lesbian, gay, bisexual and transgender persons who fought, resisted, were deported or killed during World War II and those civilians who became the victims of Nazi persecution.It was an incredible privilege to be able to represent police staff at the ceremony. Being asked to take part in the ceremonial inspection of the ranks, meeting veterans and dignitaries, was a very emotional and proud moment.I think I was particularly proud that the Gendarmerie (Police Service of France) allowed meto stand proud, shoulder to shoulder, with my uniformed colleagues from across Europe.The whole experience was an incredible privilege and one that I will remember for the rest of my life!

Shortly after returning from the conference, I was presented with a Highly Commended Julie Barnes Frank Award for Outstanding Contribution to LGBT Policing, which was an award voted for by my peers across policing in the UK and then a few months later, Iwon theDiversity Champion Award for the Public Sector at the Inclusive Companies Awards! I have to say that 2018 was a particularly memorable year, with three of my proudest moments all happening within a few months of each other.

Where we can, yes of course! We police the railway network across England, Scotland and Wales so we know that the LGBTQ+ community that travel on the railways come from the four corners of the UK, and much further afield of course. As such, it’s vital that we’re able to engage with the community at Pride events, as it’s really the only way that we can do so directly. It’s a reminder to the LGBTQ+ community that officers are real people, not just a uniform. Not only that, it’s so important for our own LGBTQ+ officers and staff to have the opportunity to attend Pride to celebrate theirown belonging to the community; recognising exactly how far we’ve comebut how much more there is still to do. You don’t stop being LGBTQ+ when you put that uniform on at the start of your shift, and it’s not acceptable to me that any organisation might expect someone to suppress this side of themselves. We want all our people to know that their sexual orientation or gender identity is valid, and extremely valuable to BTP.

Finally, what advice would you give a member of the LGBTQ+ community considering a career in British Transport Police?

If you’d have told me at any point before 2007 that I’d find myself working for a police force, with a career in law enforcement, I would never have believed you. So, I do understand the fears and concerns that some LGBTQ+ people have about a career in policing, but this is just not a true reflection of the service in 2020. My advice would be to always be your genuine self, all the time and unapologetically; as you’d be surprised how little it really matters. Being authentic is really liberating and will let you concentrate on the things that are truly important and give you the space to get on with what you need to do: performing to your very best and enjoying your career. This is ultimately what’s important to British Transport Police. We want to know you, not a version of you that you think we may be more comfortable with. To be honest, I’d give the exact same advice to anyone, even if they didn’t want to pursue a career in policing!