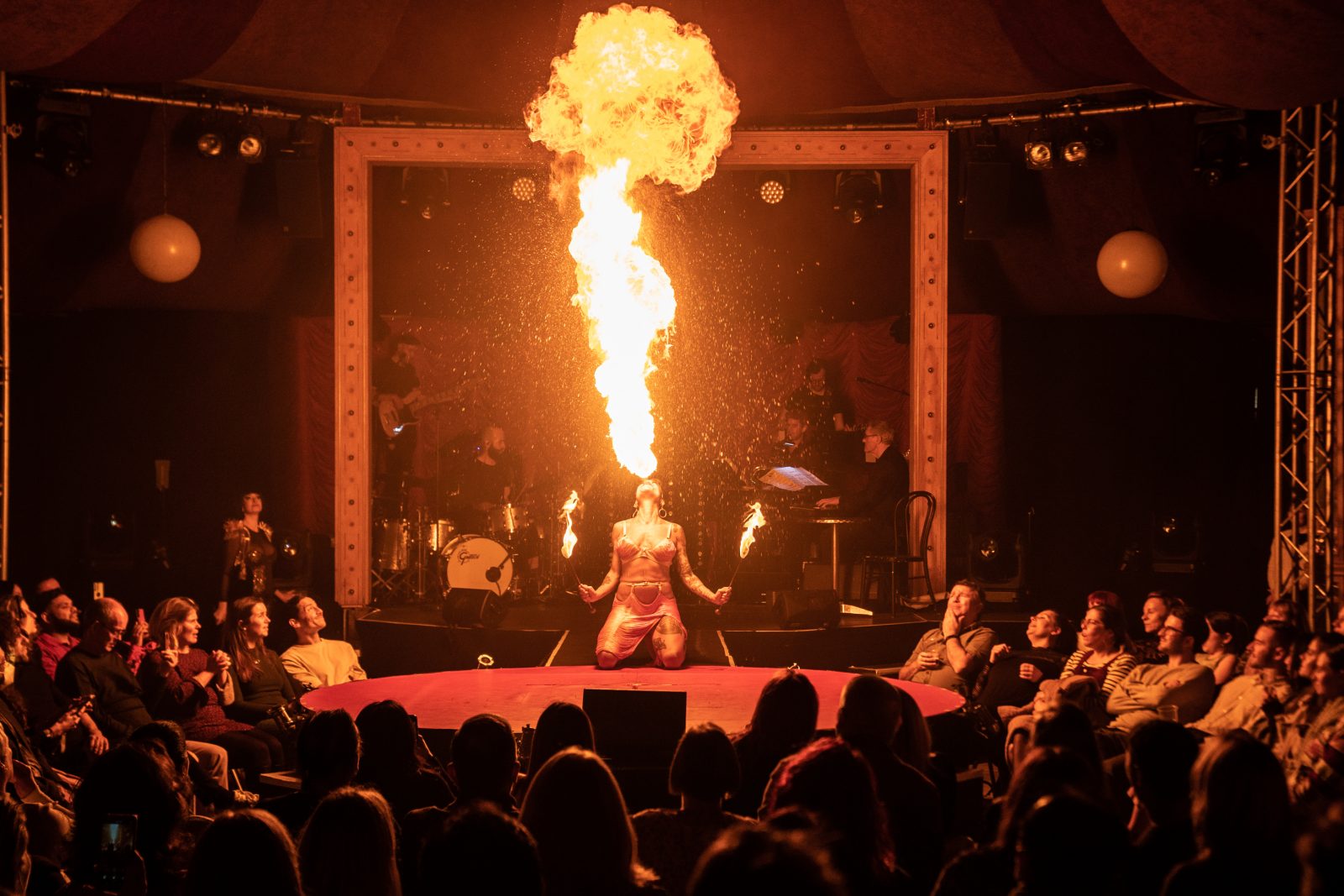 Instead of buying your loved ones more tat they don’t need for Christmas, treat them to a night at La Clique instead. The memories will far outlive the rubbish in the bottom drawer of their wardrobe, says Cary Gee

The Show Must Go On, sings the brilliant la Clique Palais Orchestra, and taking his cue, first performer of the night, aerialist Hugo Desmaris is up a rope, while contorting his rather pleasing physique into positions a human body is simply not meant to be in, quicker than you can down your first glass of fizz.The fact that Hugo manages to shed nearly all his clothes while defying gravity is a mere bonus, if you like that sort of thing.

A rollerskating bus boy thrills us with his dexterity then, like Hugo before him, gets a little hot and bothered by wearing too many clothes and decides that skating is simply easier ‘au natural’. Standing on one hand – and quivering with the physical effort – he somehow manages to perform a kind of reverse strip-tease. It is a testament to the performer’s skill that you are gripped not by his ripped near-nakedness but by the sheer physicality that his act requires.

Brilliant as both men are, they are merely a preamble to what comes next. Long time La Clique artist Heather Holliday is a genuine flesh-on-bones superstar. She looks like a tatted Josephine Baker and in her down time probably enjoys nothing more than a quiet night in. For a living she swallows swords. Lots of swords. And not just your everyday straight ones. No spoilers. Suffice to say her act is stomach-churning, utterly horrific and you can’t take your eyes off her! Unless its to watch the woman next to you clutching her belly with one hand while she covers her eyes with the other.

After an interval (which came in the nick of time) Bernie’s back to remind us (through the medium of modern dance) to wash our hands. Who knew that a Hazmat suit, when teamed with the right accessories, could look so darn hot?
After J’aimime performs a touching pas de deux with herself to Blue Moon, the lovely Craig Reid (Hula Boy) brings wall-to-wall smiles with the kind of act you fancy you might try at home. But being La Clique, soon ramps up his act to a startling crescendo, turning himself into a giant neon slinky.

You can’t have a circus without genuine peril – it’s knowing what could go wrong that makes it so compelling- and there are few acts more perilous than Pierre and Stef, the third generation of the Skating Willers. A routine that begins sedately enough soon turns into a white knuckle ride, not least for the people sitting in the front rows who are clearly aware of the danger they face, should either skater miss a beat. They don’t of course, but when Pierre and Stef finally put the brakes on you find yourself breathing for the first time in what feels like an age.

Hula Boy is back, this time in the guise of a quick-change artist, alongside Mirko Köckenberger . There’s no peril this time around, just a lingering sense of HTF did they do that? Its utterly bewitching and the closest thing to magic you’ll see this evening. Even if you can’t twist and turn from a trapeze in thigh high stilletto boots like LJ Marles you can at least appreciate how it is done! Not so with the woman who disappears inside a giant pink balloon. Creepy.

Then, just as you thought things couldn’t get any hotter Heather’s back. And this time she’s on fire. Literally. (Sword swallowing is just one of her many talents). She ends her act with a moonshot…a ball of flame she sends high into the dome of the tent. A fittingly fiery end to a scorching performance all round. Be in no doubt that the very best of live entertainment is back in town.

La Clique is at the Spiegeltent in Leicester Square, London
Go to: http://www.christmasinleicestersquare.com