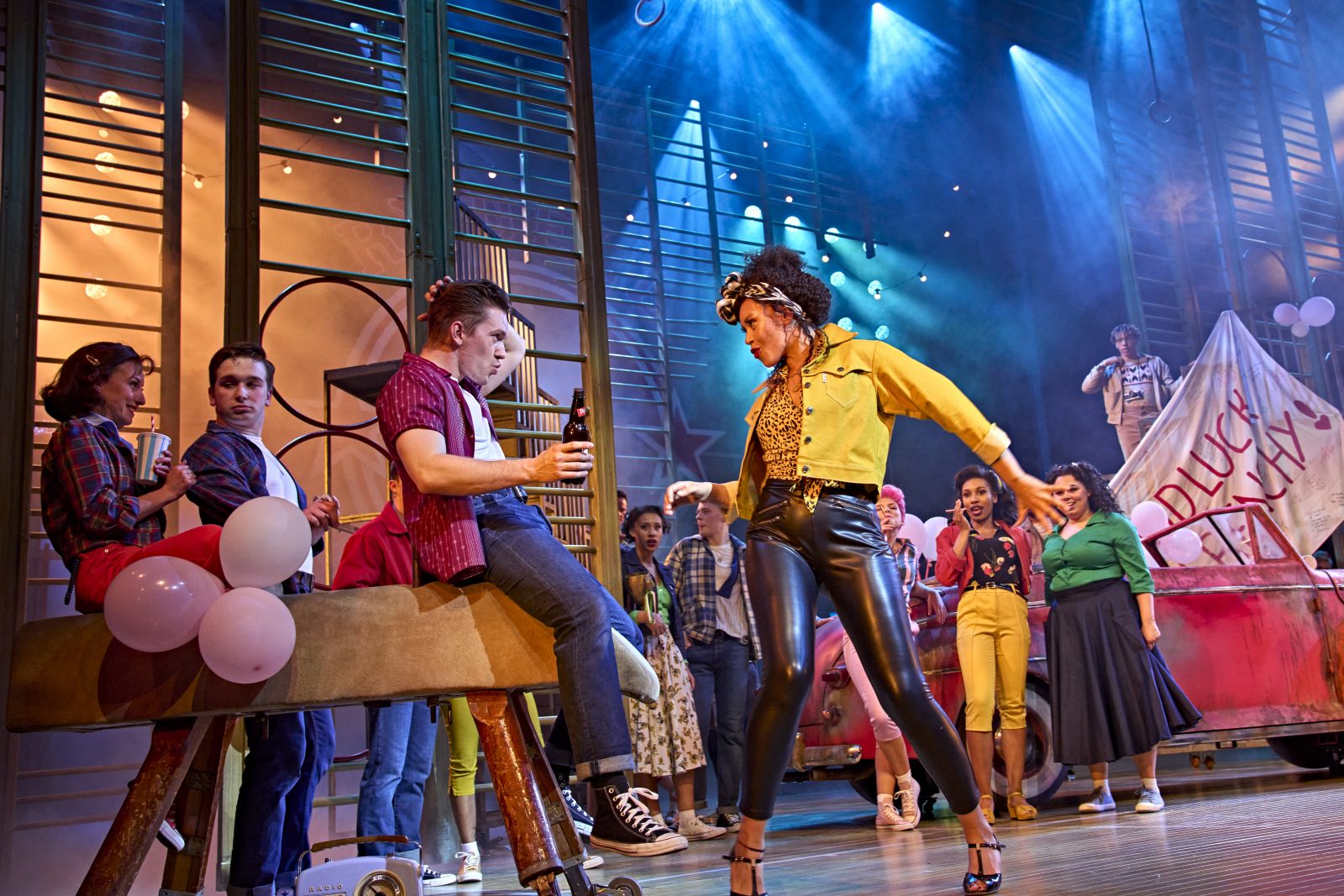 Singing the first note of a musical in front of a full house that knows every word to every song you are about to sing must be a nerve-wracking experience, writes CARY GEE, and director Nikolai Foster’s young, and relatively inexperienced cast can’t completely hide their nerves as the reality of re-imagining one of the most popular musicals ever written kicks in.

I say re-imagining, but, in actual fact, this new, supposedly “grittier” Grease simply harks back to its original inner-city Chicago setting. Gone is the Californian beach-side suburbia depicted in the 1978 film, replaced here by a drab high school gymnasium, where the Burger Bar Boys (the T-Birds were a movieland re-invention) are preoccupied with getting laid (by a Pink Lady), fighting, getting laid, cars, and getting laid. To his credit, director Nikolai Forster manages to imbue the stage action with a real sense of menace that was all but absent from the family-friendly screen adaptation.

Fortunately, all this testosterone fuels some furiously energetic all-singing, all-dancing numbers choreographed by the legendary Arlene Philips, who manages to herd her sizeable ethnically diverse cast into a series of spectacular contortions without ever losing shape.

Sadly, the same cannot be said for the non-dancing, non-singing book element of the show whose story is so full of holes you wonder how the actors don’t simply fall through the stage onto the tube line beneath the theatre.

Admittedly I’ve never seen the original stage production before, and so, like many here tonight, I risk making unfair comparisons with the film version, but when Sandy (a brunette Olivia Moore) who has barely stepped on stage for most of the first act belts out a show-stopping Hopelessly Devoted to You with perfect strength and clarity, you’d be forgiven for wondering who she is singing to. Surely it can’t be Danny (the nicely chiseled Dan Partridge) whose own show-stopper How Big I’m Gonna Be hints at a future elsewhere, maybe in sunny suburban California? In this version they’ve barely met!

Both stars are in fact somewhat over-shadowed by more minor characters. Paul French does a mean turn as a delinquent Kenickie (who seems to have walked out of the Jets in West Side Story and into the Burger Bar Boys by mistake) and Noah Harrison (as Roger) displays a bright shining counter-tenor on Mooning, a sweet song about baring your arse, cut from the film but re-instated here.

Eloise Davies is pleasingly coquettish as Beauty School Drop Out Frenchy and Peter Andre adds star power in the dual roles of the Teen Angel and the ever so slightly creepy DJ Vince Fontaine, despite the fact his Hand Jive, in which we are exhorted to join in, sounds suspiciously like “hand-job”. Unfortunately for Andre, given his off-stage role in the Wagatha Christie case at the High Court, as Fontaine he is required to introduce “the one you’ve been waiting for, the Big One” which leaves the audience tittering in embarassment and sympathy for him. Andre tries his damndest to rise above the noises off and you can’t fault his still-boyish enthusiasm, but his voice simply can’t compete with the stage-trained professionals surrounding him and his lyrical lament fails to cut through.

Far better is the simply brilliant Jocasta Almgill as the possibly-pregnant Rizzo, who ignores the shade being cast from the huddled members of the Burger Boys and Pink Ladies to deliver an outstanding There are Worse Things I Could Do. It is, without doubt, the emotional heart of tonight’s performance, packing a punch that sends you reeling, and reminding you, as if it were needed, that we’ve still some way to go before the out-dated machismo and sexism portrayed in Grease is consigned to history. But then what would you expect from a show whose leading lady, however talented she might be, only achieves any kind of validation and personal satisfaction after squeezing herself into a pair of chafing leather trousers? You can almost hear the sound of a door frame being planed every time her thighs rub together.

As a feel-good exercise in nostalgia Grease certainly fulfils its remit – there wasn’t a bum left on the seats during the Grease Megamix finale – but however brilliantly the music (expertly directed from the keys by Dan Glover) may have stood the test of time, the story, like that of so many other classic musicals, seems sadly dated. As for the trolls who have mercilessly attacked this production before they’ve even had a chance to see it, on the basis that it is no longer all-white, perhaps going to the theatre, or anywhere above ground, just isn’t for them.

Grease is at the Dominion Theatre London. Go to: http://www.greasemusical.co.uk