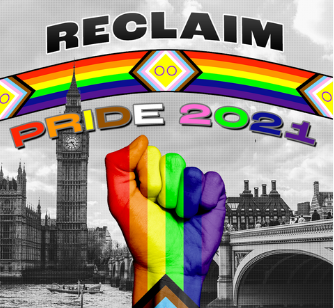 These are the fierce artists we can’t wait to see at WorldPride.

More than 2,500 people walked through the streets of London on Saturday 24 July for the UK’s first ever Reclaim Pride march.

The Peter Tatchell Foundation, which organised the protest alongside UK Black Pride, Lesbian Visibility Week, Trans Pride and others, described it as “both a celebration and a protest for LGBTI+ rights, with five key LGBTI+ demands.”

The causes include a ban on conversion therapy; reform of the Gender Recognition Act; establishing the UK as a safe place for LGBTQ+ refugees; a call to end discrimination against LGBTQ+ people worldwide; and solidarity with Black Lives Matter.

Peter Tatchell said that Prides have now become depoliticised and commercialised and that Reclaim Pride has put LGBTQ+ rights back into Pride.

“The Reclaim Pride march mirrored the community-focus and liberation themes of the UK’s first Pride march in 1972, which I and 40 others helped organise,” he said.

“It was my 50th London Pride parade. We’ve set a precedent for a successful alternative to the way Pride in London has become commercialised and depoliticised.”

Fellow organiser Linda Riley of Diva and Lesbian Visibility Week added: “We believe that Pride should be for everyone, and accessible to everyone. That’s why we’re supporting the mission to Reclaim Pride.

“You don’t need corporate sponsors to put on a brilliant Pride event. You can go back to basics. You can do things differently. That’s what Reclaim Pride does.”