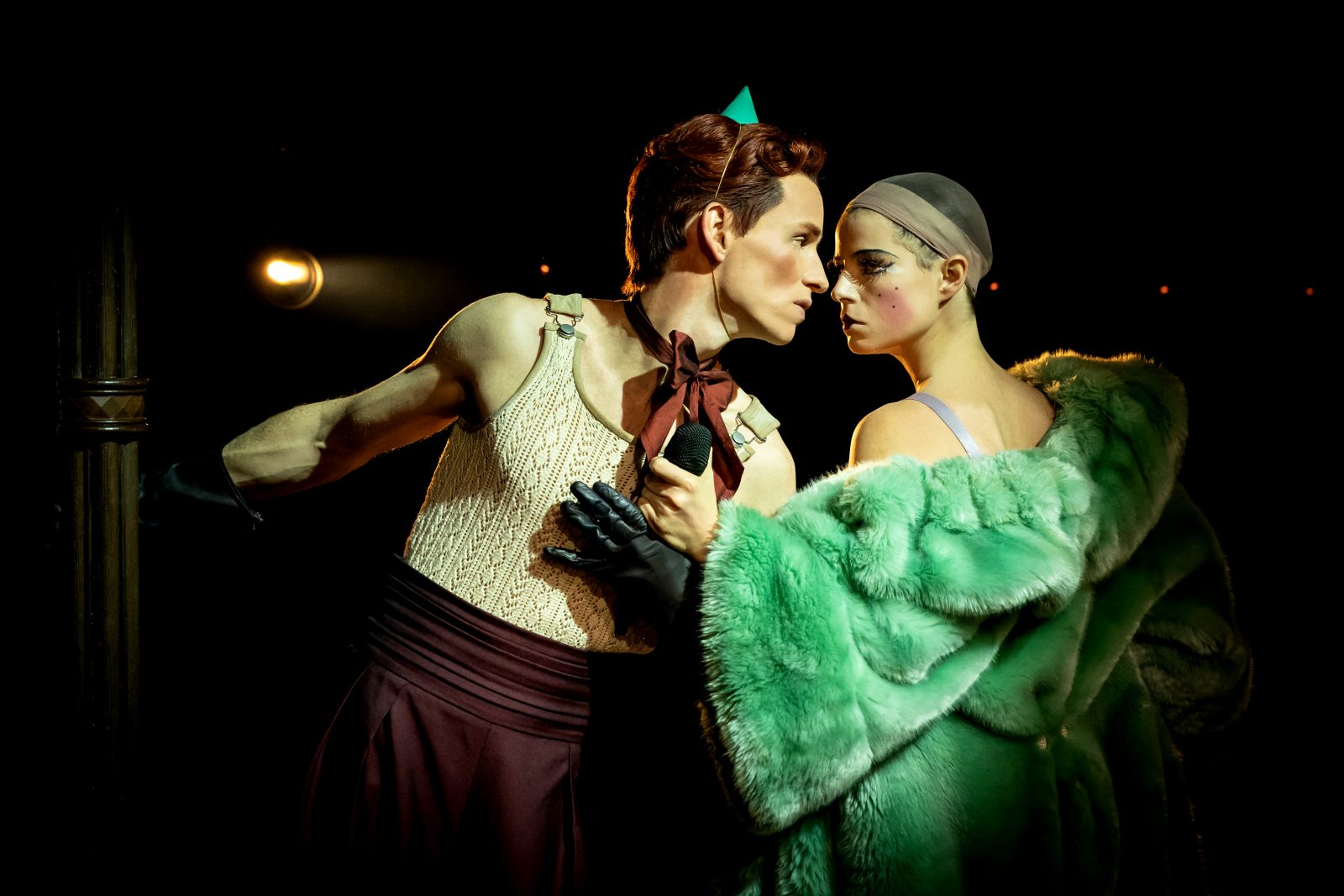 Anthony Bowens is all about AEW: Abs, Equality, and Wrestling!

Cabaret proves there is more to transition than changing your gender says CARY GEE.

When it was announced that Oscar winning actor Eddie Redmayne had been cast as the Emcee in Rebecca Frecknall’s astonishing revival of Kander and Ebb’s Cabaret a collective frisson of excitement slowly built to a crescendo across theatreland. Would Redmayne, in enough trouble already for his casting as trans-woman Elbe in the Danish Girl be able to pull off one off the most iconic, not to say, ‘gay’ roles in musical theatre?

The answer is a resounding yes. From the moment the drum roll sounds in the Playhouse theatre – now transformed into a fully immersive Kit Kat club complete with pre-show performances in the bars and corridors and stage-side dining options – and Redmayne uncoils himself like a malevolent puppet given life to conduct the Cabaret of girls, boys and somewhere in betweens you can’t take your eyes off him. It really is one hell of a Willkommen as the circular wooden stage revolves to reveal a smorgasbord of writhing, twisted humanity.

It’s impossible of course to think of Cabaret without hearing Liza Minnelli somewhere in your head, yet as Sally Bowles, Jessie Buckley does all that it is humanly possible to do to drown out the sound of Minnelli and for the most part succeeds beyond your wildest expectations. Her Sally, in keeping with Christopher Isherwood’s inspiration, is a middle-class English girl with a voice that is as likely to shatter a glass as a heart. She leaves it all on stage until by the end she has nothing left to give.

Her relationship with American ingénu Clifford Bradshaw (Omari Douglas) who discovers too late that his new friend Ernst Ludwig (Stewart Clarke) is a (pleasingly amenable) Nazi, never threatens to boil over, but rather simmers in time with the deteriorating political situation. On a train to Paris, beautifully suggested by a miniature model railway that skirts the stage in a design by Tom Scutt, Bradshaw begins his novel.” There was a cabaret….it was the end of the world, I was dancing with Sally Bowles, and we were both fast asleep…”

They are both young and seemingly have all the time in the world to make their mistakes, unlike the elderly landlady of Bradshaw’s boarding house, Fraulein Schneider (the outstanding mezzo Liza Sadovy) who is wooed with a pineapple by fruiterer Herr Schultz. As a German citizen Schultz (Elliot Levey) refuses to accept the danger of his situation. But he is also a Jew and their love story, the one true thing in Cabaret, is doomed. No sooner has Fraulein Schneider accepted her pineapple – It couldn’t Please me More – than here’s the Emcee pre-empting Nazi ascendency with Tomorrow Belongs to Me. At first I thought Redmayne must be miming, so sweet is his tenor, but no, it really is his voice, and although you might struggle to hear it above the orchestra (led with perfect economy by Jill Farrow) in a traditional theatre setting, here, sung in the round, it is just perfect and chills every bit as much as it did when sung by the Hitler Youth in the film version.

Maybe This Time (inserted in the film at Minnelli’s personal request and retained ever since) is outstanding, allowing us to overhear Sally Bowles’ internal dialogue and to see the person beneath the clown makeup and the wig which now comes off. You just want to pick her up and take her home, but this is the only home Sally knows and she ain’t going anywhere, not without a fight….which comes soon enough in the much shorter, and much darker second act after Bradshaw is brutally attacked by Nazis. The fact that Bradshaw is portrayed by a black actor sounds an extra resonance that can be heard well beyond the theatre walls.

Few things induce goose bumps more than goosesteps, except perhaps the sight of chorus girls masturbating to Mein Kampf (during the grotesque Two Ladies) and there are few more powerful punchlines at the end of a song than that which concludes If You Could See Her (Like I Do). Sung by Redmayne to a girl in a gorilla suit it’s both a plea for tolerance and a chillingly bizarre reminder of the fascination with fascism that still exists today. “If you could see her as I do, she wouldn’t look Jewish at all! “Unlike Joel Grey in the film version, Redmayne spits out the last line with contemptuously fury, yet still manages to give the impression that as Emcee he wouldn’t hesitate to blow a member of the Gestapo if that’s what was needed to keep the doors of his club open. He is the everyman figure. Man/ Woman/ Gay/ Straight/ Nazi/ Jew/ Pimp/ Prostitute – Like a mamba he menaces and mesmerises in equal measure, and, like Fraulein Schneider, is there to ask “What Would You Do?” The answer really doesn’t bear thinking about. As Schneider wrestles with her heart Redmayme leers from the sidelines, like a ghoul from the near future, seemingly pulling her strings with the most subtle blink and you’ll miss it acting. It’s an astonishing display of his talents, just when you thought you had seen it all. Much needed comedy is provided by the brilliant Anna Jane Casey as insouciant Nazi hooker Fraulein Kost who determinedly smuggles her trade into Fraulein Schneider’s boarding house through the back door.

I Don’t Care Much sees Bowles / Buckley working her way towards her big finish, and when it comes it knocks you sideways. Cabaret itself is perhaps the most unexpected highlight of all in a show stuffed to the rafters with highlights. Unexpected because Buckley’s treatment is like no other Cabaret I’ve heard before. The party may be over but her Bowles is damned if she’s going quietly. Instead she is a soul possessed, Hell bent on wreaking her own implosion to match that of the world outside.

From the newly scored prologue performed as you enter the Kit Kat club through the stage door to its finale, Cabaret truly is remarkable entertainment and more than justifies its billing as the hottest (not to say most expensive) ticket in town.
“Willkommen. Outside it is winter, but in here it is so hot!” sings Redmayne. Days later I’m still feeling the burn!! Wow….Just Wow!

Cabaret is at the Playhouse Theatre, London.
Go to http://www.kitkat.club