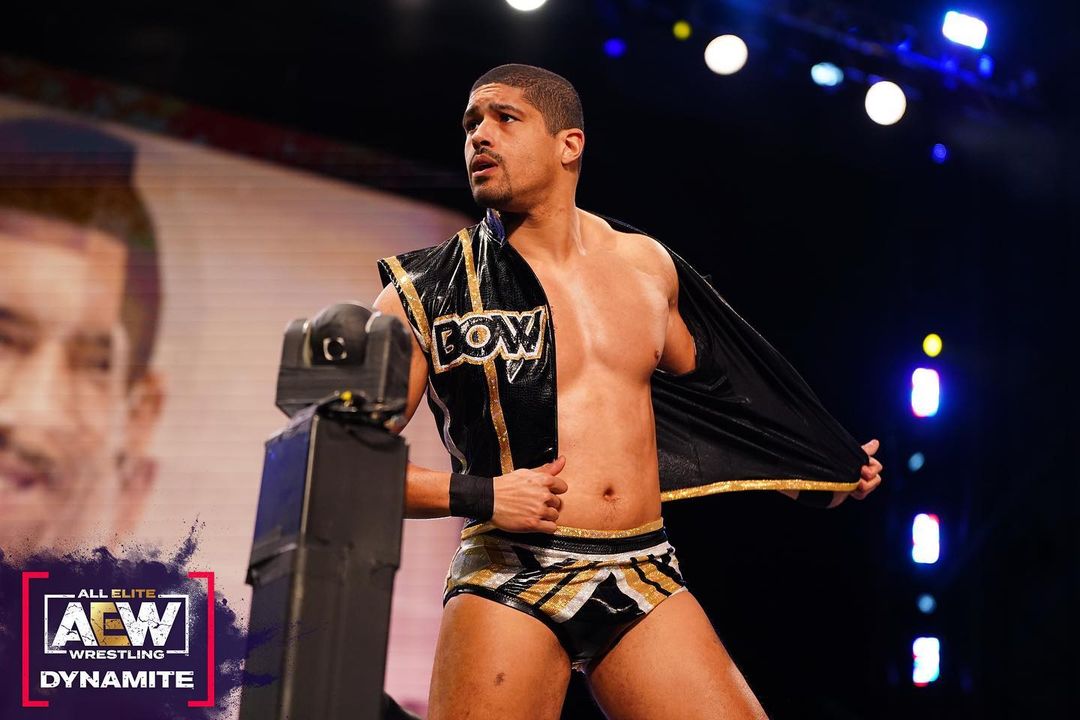 For those not familiar with professional wrestling. Wrestling is incredibly camp and involves grown men and women rolling around half-naked in spandex, but comes with a notoriously macho culture and is rife with casual homophobia.

However, All Elite Wrestling is rewriting the playbook. Perhaps, the best example of their mission to drag wrestling into the 21st Century was the companies decision to award transgender wrestler, Nyla Rose, the women championship. They also allowed genderfluid and queer wrestler, Sonny Kiss, to wrestle as their authentic self, in the main event on their television show watched by over a million people.

Over the past couple of years, All Elite Wrestling established itself as a viable competitor to the Trump campaign backing empire, the WWE. With Bowens, and his tag team partner Max Caster, becoming a beloved homegrown part of the rival show. Together, Bowens and Caster are known as The Acclaimed, where the duo are hotly tipped as two of the industry’s rising stars.

Bowens’ relationship with his partner Michael Pavano has been well documented in the LGBTQ+ press and via the partners’ YouTube channel, which gained traction after Bowens came out in 2017. Pavano and Bowens hit the press again recently when the couple bravely took a stance in front of anti-LGBTQ+ ‘activists’, posing for a picture – quite literally in the face of adversity.

Despite this, Bowens returned to live television this week where an audience member was recorded heckling Bowens during his match, calling him a ‘f*g’. AEW cannot be held responsible for all of its audiences actions, and it should be acknowledged that Bowens does portray a villain. However, this sad event emphasises the importance of visibility for the likes of Bowens on television, especially in industries where LGBTQ+ representation is poor.

Bowen’s class in All Elite Wrestling are by no means the first ‘out’ LGBTQ+ professional wrestlers. However, Rose, Kiss and Bowens’ characters on the American TV show are not defined by their sexual and gender identities. Nor are they asked to portray reductive versions of queer caricatures at the behest of the creative team.

Wrestling legends, the late Chris Kanyon and Pat Patterson were also prominent LGBTQ+ figures in wrestling. As depicted in the docuseries, Dark Side of The Ring, the wrestling business’ culture undoubtedly contributed to Kanyon’s untimely death. Kanyon alleged that coming out cost him his job in the WWE back in 2004. Whereas, WWE Hall of Famer Patterson opted to come out after his in-ring career was over. His sexuality was never acknowledged on TV until his final years.

The tragic events that surround the end of Kanyon’s life in the late 2000s, highlight the significance of AEW presenting LGBTQ+ performers in prominent positions on their match card. Especially, as these performers are openly ‘out’ active wrestlers. As seen by the fan heckling Bowens, we still have more work to be done to make wrestling a queer safe space. However, the legends like Kanyon and the current crop of active LGBTQ+ wrestlers are paving the way for the next-gen, the future gen of queer wrestlers and fans. Kudos, AEW for that.