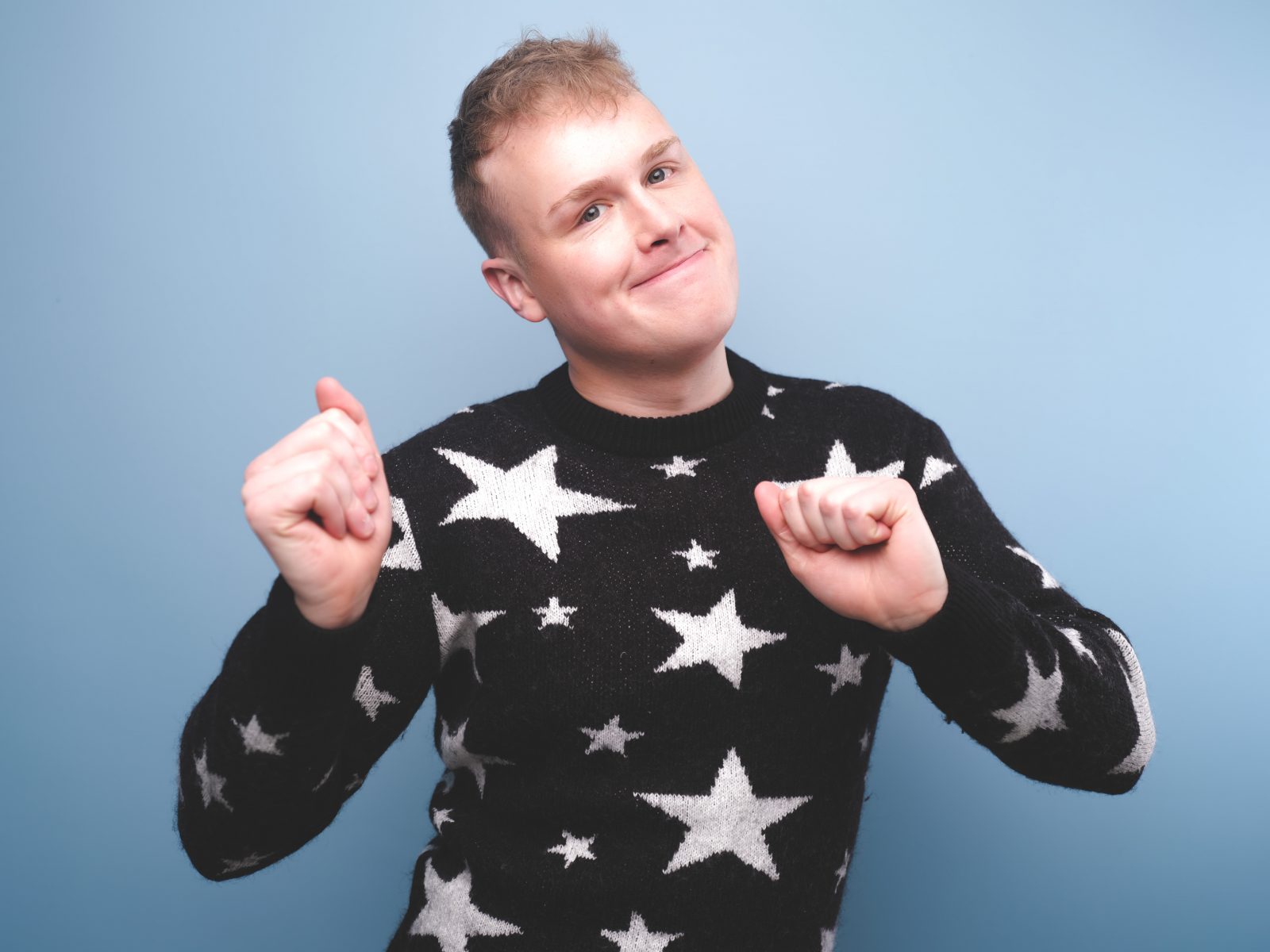 CARY GEE caught up with hilarious LGBTQ+ comedian Josh Jones and chatted to him about puppeteers, passports and being a waste of space

Good Morning Josh. Where and how are you?

“I’m in Edinburgh. And I’m good, thank you. The show’s going really well although I don’t know what day it is.”I’m doing a show every day of the month. Twenty-eight. I think”

Perhaps you could introduce yourself to our readers.

“I’m a comedian from Manchester. I started out in working men’s club in the North. I’ve been working the club circuit for a couple of years and recently started doing a bit of telly”.

Is it tough being a gay comic in working men’s clubs?

“A little bit but then that makes you better. It was tougher at the beginning. A lot of audiences were a little disappointed because they don’t necessarily want to watch a camp gay guy they might not relate to. But it makes all the other audiences easier in comparison!

Have you ever suffered from a nightmare heckler?

“Yes. When I first started I had a homophobic heckler. But it’s very rare, to be honest. I can’t really remember how I dealt with him but it’s not as scary as people think. The people who do it are never very smart. I don’t have a favourite put-down. I just try to make it personal because then it hurts a bit more!”

Have you ever had to deploy your sense of humour to escape a difficult situation?

“Yes. I’m not qualified for most jobs so I would just lie on my CV. Then I’d make them laugh in the interview. I’d just make up jobs I hadn’t done. My mum has a different surname to me so I’d put her down as my referee.”

Are you currently single or attached?

“Well, that’s a question! I’ve been dating someone for three and a bit months although we’re not officially boyfriends. But we’re not allowed to sleep with anyone else either.”

Have you ever been on a date and thought, “This guy is comedy gold?”

“Yes. The last date before the guy I’m dating now was a puppeteer and was probably one of the most interesting people I’ve ever met. Not necessarily in a good way. He had some spicy opinions as well, particularly about bi people”.

Your show is called A Waste of Space, isn’t?

“It’s called A Waste of Space because you have to give a title six months before the show. It’s just loads of funny stories about me being a comedian. I talk about all the injuries I’ve had, about the weird jobs I’ve been in, all kinds of stuff.”

What’s the funniest thing that has happened to you this week?

“I’m having a problem with my passport. I’ve lost it and am trying to get a new one. But because I’ve lost three in ten years I had to do a Zoom interview to prove I wasn’t selling them! That I’m not some sort of master criminal. They agreed to give me a new one but because I can’t be trusted its only for 12 months!”

What do you all day, while waiting to go on stage?

“I go to the gym. The stand-up is actually the easiest part of the job. All the writing, the organising, the meetings, all the boring stuff happens in the day. The stand-up is the fun bit.”

Have you ever tried online dating and how would you describe yourself in your profile?

“I’ve been on a few. In fact I’ve only recently left them! I stopped using Grindr. It was weird because people had either seen me doing stand-up or seen clips of me on telly or Tik Tok. I couldn’t enjoy it because people knew who I was! Early on I described myself as a comedian, but if I was on a dating app and someone described themselves as a comedian I would swipe away straight away.”

Are there any jokes you wouldn’t share because they are simply too offensive?

“There are jokes I’d tell when I first started that probably haven’t aged as well. But I wouldn’t want to offend anyone or hurt their feelings”.

If you were PM for the day, what’s the one law you would pass to make Josh Jones’ life easier?

Do you have a favourite gay joke to share?

“Well, I think gay men get away with murder nowadays. We need to be reined in. If you’ve ever worked in an office you will have seen it. A camp gay guy will say something to his colleague at work. She will say, ‘Oh he’s just so funny’ and you think, ‘No, Carol, he’s just called you a fat bitch!”