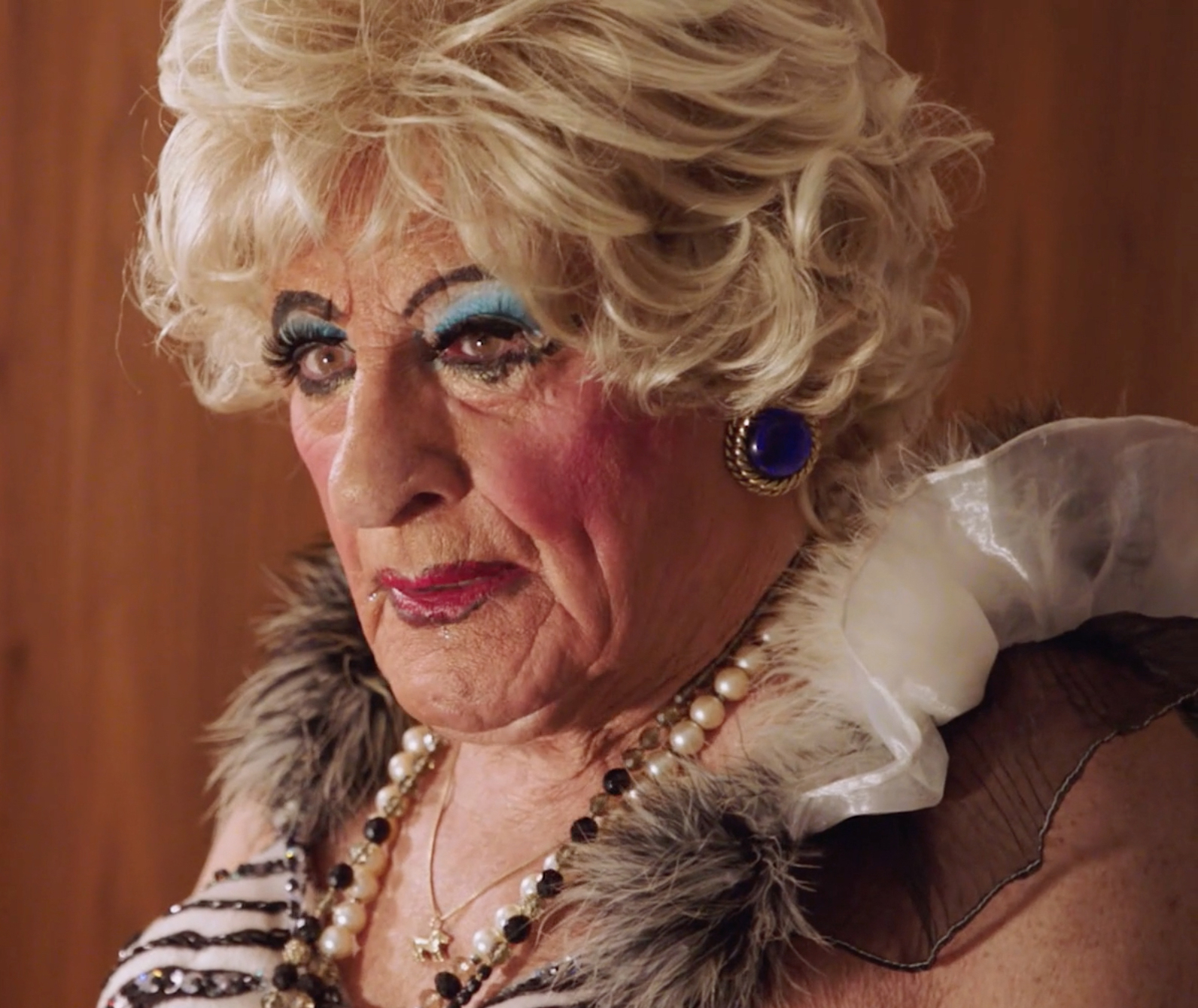 David Raven, otherwise known as the legendary Maisie Trollette, is Britain’s oldest drag queen and the subject of a new film on his life. And Maisie’s not ready to give up the stilettos yet, discovers Cary Gee

It’s lunchtime and I’m sitting in a neat garden flat in Kemptown, a few short blocks from Brighton Pier. In the cloudless sky above I can hear gulls mewling.

Opposite me sits David Raven. His mint green polo shirt, smart striped blazer and white shorts are exactly what any gentleman who has retired to the coast might pop on for a prom along the seafront.

Yet David Raven is no ordinary pensioner, and retirement is not yet on the cards. Despite being 88 years old, Raven still performs regularly as Maisie Trollette, and, as such, has more than earned the title of Britain’s oldest Drag queen. Alongside David sits the improbably named Lee Cooper, who chose Raven as the subject for his first feature film. Completed just before the start of the pandemic, Maisie received its acclaimed world premiere at Sheffield’s DocFest where it won an audience favourite award.

I ask Raven to introduce himself and tell us in his own words why someone might want to make a film about his life.

“Well, there’s all this stuff out there about how I started my career at the Black Cap [in London’s Camden]. But I was working way before that. People jumped on the Black Cap association because that’s where Jimmy [James Court] and I became known as the first live cabaret act to perform there, with a keyboard and drums. We were the original breakthrough live act.”

I ask David how he met Lee.

“He was standing on the corner of the street with a begging bowl and a white stick!” he says.

Lee replies, “We were introduced by friends. I’d lived in Brighton for a few years and was a big fan of the cabaret scene. I used to visit venues like the Queen’s Arms and Legends. I wanted to make a film and was told I had to meet David. Not only is Maisie Trollette this larger than life, outrageous character, but David too is one of the most thoughtful performers out there.”

At what point does the film Maisie pick up the story of David’s life?

“Rather than telling the story of David’s life, Maisie is about a particular week in David’s life. Unfortunately there’s not a lot of surviving historical footage of Maisie performing. He began performing well over 50 years ago when homosexuality was still illegal. There’s no footage from those venues.”

During these early years as a performer David was still holding down a day job as the assistant manager of Selfridges’ food hall. How did he overcome the inherent difficulties of performing at gay clubs in the evenings when being gay could lead to imprisonment, or worse?

“Well, I didn’t,” David says. “Offstage I’ve always been quite a private person. I discovered quite late on that I was gay. I met my partner about a year later and incredibly was with him until he passed away.”

Was he never fearful of arrest, or of being caught in the wrong place at the wrong time?

“Well we had to be careful. I’d be at Selfridges until 4 o’clock. Then we’d get ourselves down to the RVT to perform our live act in the evenings.”

Was there ever a moment of clarity when David decided that performing drag was going to be his future?

“No. Before then I’d won prizes, worked in television and as a dancer. The drag came completely out of the blue.”

“A lot of people will know David as one of the Trollettes” Lee says. “Jimmy was performing one evening and basically forgot some of the words. So David sang for him.”

David picks up the story. “I had been performing as a dame in panto and Don [David’s partner] said, ‘You look like a couple of bloody trolls.’ Well, this was all new to me. I didn’t realise that trolling was what men did on the Embankment and up in Putney. It meant cruising!”

“He meant you looked like a troll,” Lee responds.

“I do not look like a troll! Don’t push your f**king luck!” Raven snaps back.

What makes a good drag artiste? Raven considers the question for a moment.

“Being live, and not being a queen,” he says. “It’s about being an artiste. It’s the same with panto. How many straight men have played the ugly sisters, or the dame?”

I ask what he thinks of the new television generation of drag queens.

“I have absolutely no interest in them whatsoever,” he replies emphatically. “They can’t perform live.”

So what does he make of RuPaul’s Drag Race? Almost before I’ve finished my question I realise my mistake. Raven turns to Lee and demands he fetch some toothpaste to wash my mouth out: “A name you don’t mention in front of me is that c**t!”

Raven finds it easier to describe what makes a good audience. “One that is alive and not in the cemetery. I did 19 pantos for the BBC in front of a live audience,” he adds proudly.

A lesser known story about Raven’s work for the BBC is his appearance in Doctor Who where he was once seen grappling with sea monsters on a beach as Jon Pertwee’s stunt double, but we’re in constant danger of getting distracted.

What particular difficulties did making a film during a pandemic throw up?

“Luckily we finished the actual filming before the pandemic really started,” says Lee. “One of the benefits of the pandemic was it allowed us more time to discover some of the nuances in the footage we’d filmed. David was very brave on camera and allowed us access to all areas.”

At the heart of Maisie is a meeting between Raven and his American counterpart Walter Cole who performs as Darcelle XV. Cole, certified by the Guinness Book of World Records in 2016 as the world’s oldest drag artiste is now 90 and was recently diagnosed with dementia. That must have been quite a meeting…

“We thought that David must be one of the oldest performing drag queens in the world,” says Lee. “When I checked with Guinness we discovered that Walter was still performing in Portland, Oregon, as Darcelle. So I contacted Walter and said, ‘I’m working with Britain’s oldest drag queen…’”

“’You’re the oldest in the world. Would you be willing to give me an interview?’” says Lee and then adopts a bad American accent. “Walter replied. I’ll do better than that. ‘I’ll come over there!’”

Walter met Lee one afternoon and they spoke about their experiences and shared stories’.

Among the subjects they discussed was Maisie’s dress. “One Yank and it’s off,” cackles David!

Ultimately David sounds a little disappointed to discover that Darcelle mimed her act.

‘He told me that he had performed live’ says Raven. “I asked him; ‘What did you do? Clap your f**king hands?’

“Let’s just say there was a certain amount of professional rivalry,” says Lee.

I want to know how David felt when he saw Cooper’s finished film.

“I couldn’t believe that you let me swear so much on film,” says Raven crossly. “I hate swearing!”

“You don’t swear on stage, but behind the scenes you do, sometimes.”

I ask Lee what was the best thing about working with David and again it’s David who answers first. “It’s all the money he made out of me!”

“David is such a colourful character,” Lee replies. “He’s been on the scene and in the business for over 50 years. He always has a story. He’s still working today and it was just a wonderful opportunity to explore David’s life.”

And the worst thing?

“Not the worst… but one of the more challenging is that David is a performer, and when he’s offstage, quite often he’s still performing. He likes to wind people up. What was most interesting when we saw the film together for the first time was how emotional we both felt when David appeared a bit more vulnerable. For David, who was just going about his business he felt most emotional looking at old photographs.”

After the screening David turned to Lee and described his film as an SOS film. When Lee asked what David meant, Raven replied,”Same Old Shit!”.

Like all performers Raven found lockdown difficult, but in his case he found a way to alleviate the boredom.

Lee tells the story of how David’s neighbours would descend the steps to his flat to deliver parcels to him throughout lockdown. Some days, just for fun, Raven would don his full drag – ball gown, wig, lashes and face – and lie in wait behind the door as Maisie

“It gave them a hell of a surprise when Maisie opened the door!”

I think I already know the answer to my next question but I ask it anyway, just to make myself feel better.

“Has Raven enjoyed his life?”

“Ask me when I reach 50!” he says. “Seriously, I’ve been a very. very lucky man. I’m 88, I can still do the shows. I still dress myself and do my own make up. In fact I just throw it up in the air, stand underneath and see where it lands!”

Ravens answer is unprintable. Suffice to say, this interviewer is still blushing!

He asks if I’d like to see some old photographs. You bet. So he takes me on a tour of his bedroom (he’s had a tidy up for the occasion). Pride of place are the photographs of Raven and the love of his life, Don.

Finally Raven sits me down on the edge of his bed so that Lee can take a quick snapshot for posterity. David drapes an arm over my shoulder and whispers into my ear. “I’d better not get a hard on or I’ll fall off the f**king bed!”

Maisie is currently on general release. To find out where the film is showing go to Twitter @leecooperfilms