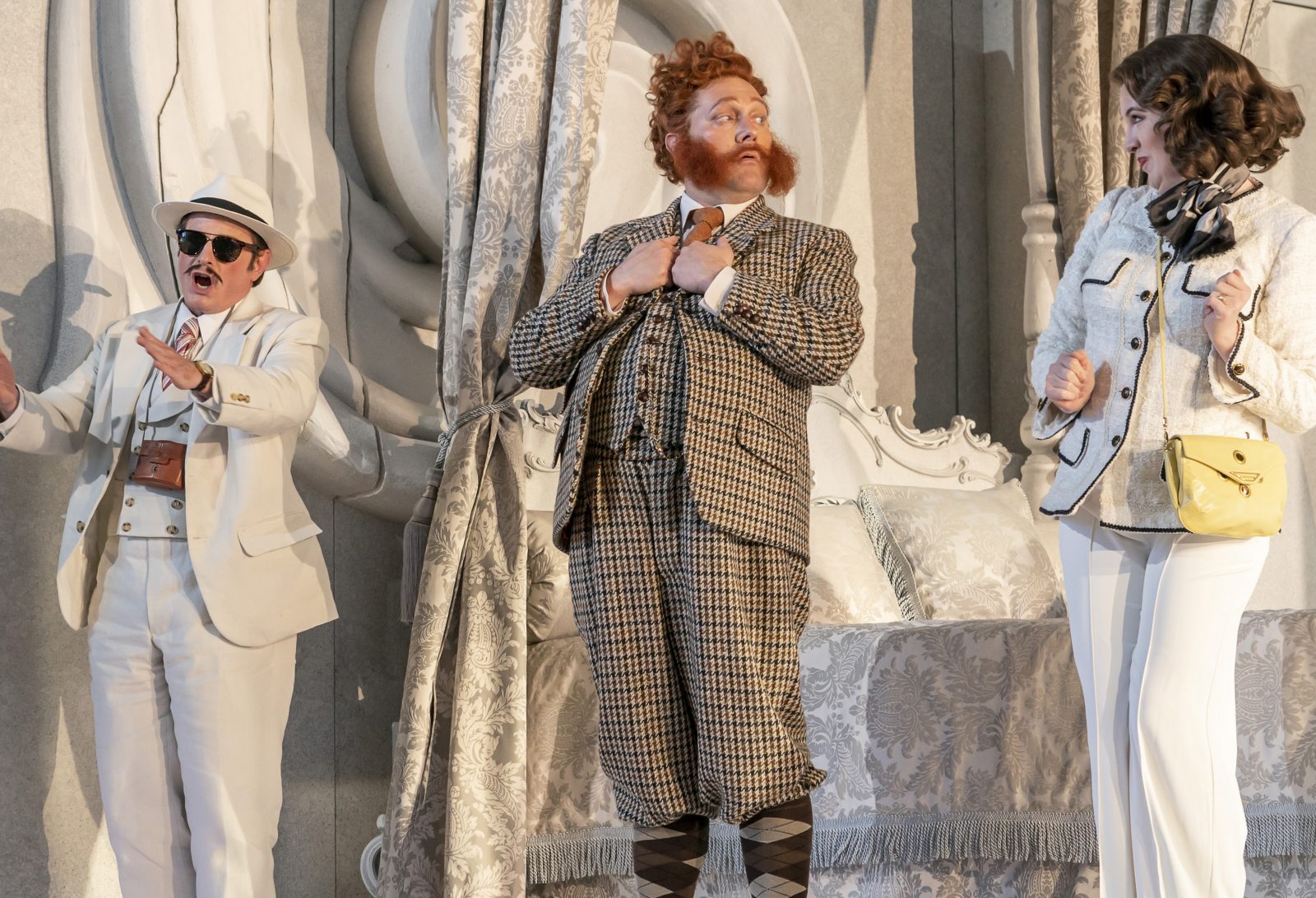 If you’re going to come out you might as well do it in the most spectacular setting possible, writes CARY GEE, and there really is none more spectacular than Garsington Opera, staged each summer at Wormsley Hall, a short hop down the A40 from London.

It’s difficult to think of a more stunning venue at which to make a first outing to the theatre for 16 months, and you get to wear full evening dress and quaff champagne in broad daylight! What’s not to like?

Sex is a central theme in Der Rosenkavalier by Richard Strauss which opens with the Marschallin, Princess of Werdenberg, in bed with her 17-year-old lover Octavian, and here the fun begins, for Octavian is a “trouser role”, albeit one is which he/ she first appears without any trousers!

Cross-dressing has been a trope in opera all the way back through Handel to 17th century Italy and becomes even spicier when characters are “twice crossed” as here and in The Marriage of Figaro. For Octavian is played by a woman playing a man who then plays a woman.

Miah Persson is radiant as the Marschalin who knows her illicit affair cannot last. She looks and sounds stunning, capturing perfectly the pathos of her situation with growing dignity and resignation. As Octavian, her young lover, Hanna Hipp is equally astonishing, with a ravishing voice (a wonderful pianissimo in the highest register) and subtle skill as she navigates her changes of identity and gender with wit and charm. Sadly for our Princess, who dazzles in a series of bejeweled “New Look” frocks, Octavian is “like all men” and must eventually find another lover, Sophie Von Faninal, who is the third side of this triangle and beautifully delivered by Madison Leonard.

The celebrated trio at the end of Act Three is utterly heart-breaking, truly one of the finest passages in all opera, and these three singers do not disappoint. Heart-stopping.

A foil to all this loveliness is provided by the lasciviously vile Baron Ochs who intends to wed Sophie, though he’ll take his chances with almost every female unfortunate enough to cross his path. The Me Too movement surely has him on its radar. It would be hard to find a finer Ochs than the devilish Derrick Ballard. Strong in voice and with a real comic gift, he is surely a shoo-in for a future Falstaff.

Bruno Ravella’s production is a true company production. Act Three, during which I counted 33 performers on stage at one time, veers from high comedy to burlesque to heartache and back again. There are no weaknesses, only fine performances throughout. Jordan de Souza conducts stylishly and unhysterically in a slightly revised (Covid) orchestration by Eberhard Kloke (and for a conductor he is surprisingly cute too!) The players of the reduced Philharmonia sparkle but never tire. Despite some of the on-stage nonsense Der Rosenkavalier contains the most exquisitely beautiful orchestral writing – Waltz Darling? You know you want to – and what about those Philharmonia cellos?

Gary McGann’s design with outsized rococo plasterwork perfectly captures Fin-De-Siècle Vienna and Malcolm Rippeth’s lovely lighting is only enhanced by the sun setting outside the auditorium.

Garsington continues to be the jewel in the crown of country house opera, and for this reviewer at least, has gone some way towards saving summer. A real scorcher!
Go to Garsington Opera