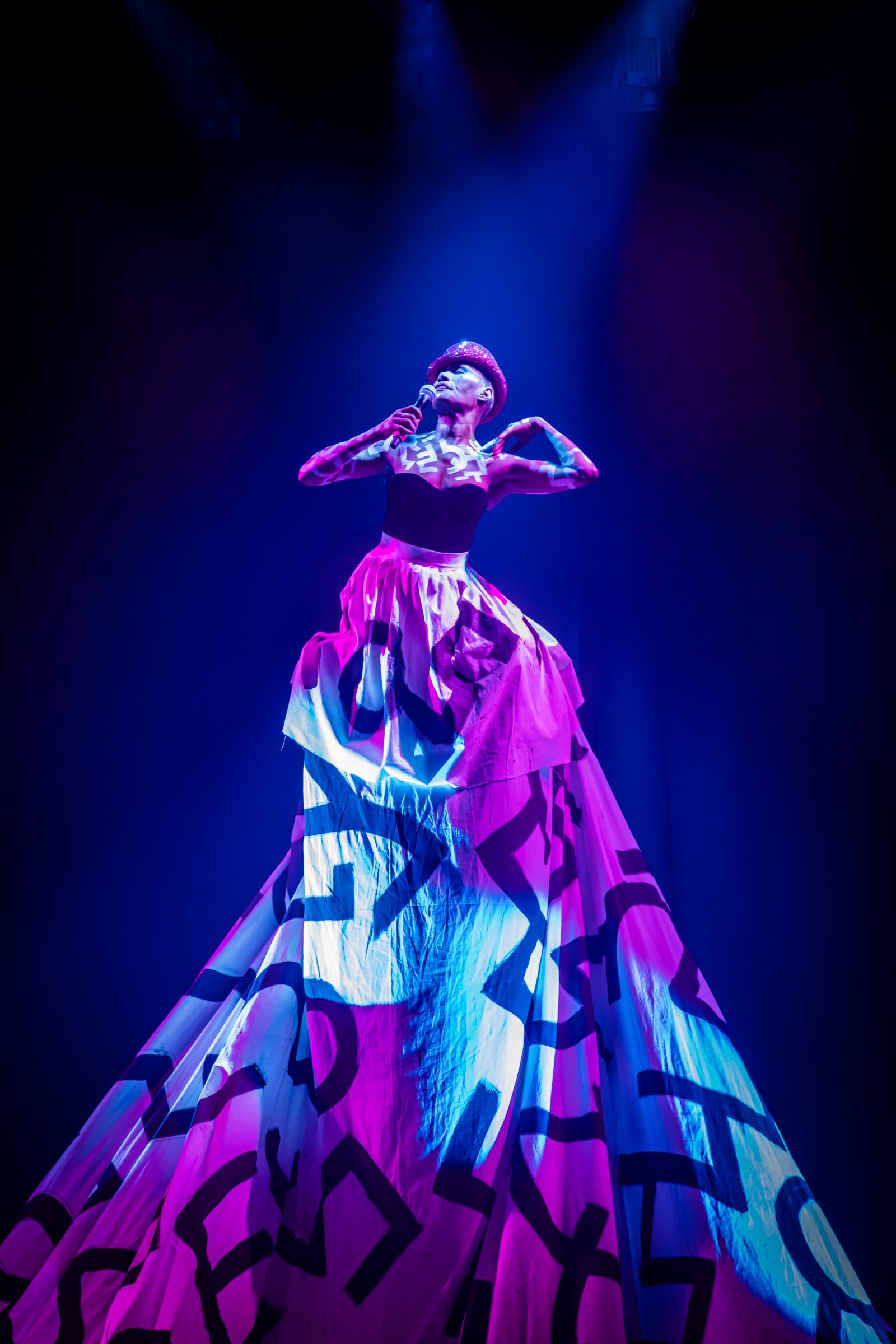 Why merely light up a room when you can detonate it instead, asks CARY GEE?

As the spotlights go up in the Royal Festival Hall for Grace Jones’ closing performance at this year’s Meltdown festival Grace is nowhere to be seen, at first.

Then suddenly, there she is, the top of her Philip Treacy hat skimming the lighting rig as she stares down at her audience like a mythological giantess, the train of her dress cascading to the stage like a waterfall painted by Keith Haring.

Except Jones is most definitely real, a flesh on bones icon, and the chaos that ensues as her audience scrambles to its feet in order to get a better view of their goddess of high camp is a testament to her enduring authenticity. An authenticity that enabled her to sidestep disco’s death rattle and become a lasting beacon of cool.

Her choice of the reggae tinged hip-hop number This Is from her last studio album Hurricane as her opening track indicates that Grace is not here to perform a synthetic greatest hits medley. Neither is she here to present a high-gloss cabaret without seams.

Instead we see an unvarnished though heavily-painted performer struggling at times with everything from her costume changes (I counted 11) to finding the right lyric sheets on the music stand in front of her. Being one of Grace’s stagehands is definitely not a job for the faint-hearted and she claws at one like a cat with a mouse. But it takes more than a little under-rehearsal to divert a force as unstoppable as Jones for long, and she strides above the chaos like a true colossus. Hearing the occasional expletive from the wings as she wrestles with a new hat, or demands her glass of wine is refilled, only adds to the pervading sense of jeopardy. And isn’t that why we’ve all come in the first place? Jones doesn’t really do ordinary, that’s for mere mortals.

We’ve come for the music too, of course, and Jones, backed by an eight-piece band doesn’t disappoint.

I’ve Seen that Face Before (Libertango) takes us on a nocturnal tango through the sleazy underbelly of Parisian nightlife, while her definitive version of the Pretender’s Private Life, performed by Jones writhing on the floor, drips with sarcasm and wicked humour. I watch the audience watching Grace as she sings My Jamaican Guy and don’t think I’ve ever seen so many BAME queers in the same building before. Proof, as if it were needed, that Grace reaches the parts of an audience that others performers can’t reach.

Sunshine in Wartime affords a thrilling preview of her forthcoming African Hybrid’ album and indeed, as Jones prowls the stage in fresh plumage and animal prints, while demolishing her cymbals on Sting’s Demolition Man she looks for all the world as though she is wearing a fresh kill.

Want to see a (remarkably unchanged) 74-year old-woman hula-hooping on a podium? Then you’ll love her rendition of Slave to the Rhythm, while Love is the Drug sees Grace, in silver-sequined bowler hat, transported back to Studio 54 and transformed into a human disco ball.

On an extended Pull up to the Bumper Grace goes walkabout. At least a security guard does, while Grace, perched atop his shoulders which don’t seem quite broad enough, is carried through the RFH to greet her subjects like an African Queen on her sedan chair.

“I need to get my heart rate down. Call an ambulance,” she intones at one point. Better make it a big one. By this time the RFH is teetering on the edge of a collective faint. It’s hot outside, but a hell of a lot hotter inside.

For an encore she performs Hurricane. Fittingly because we all feel like we’re definitely not in Kansas anymore. But Grace isn’t ready to leave the stage just yet. Even as those brave stagehands are throwing in the towel and frantically signalling that the show is over Grace emerges, for one last time, cigarette in hand, to send us into the night with an a capella version of La Vie en Rose. An unforgettable performance by a true original. The only question is: where the hell were you?