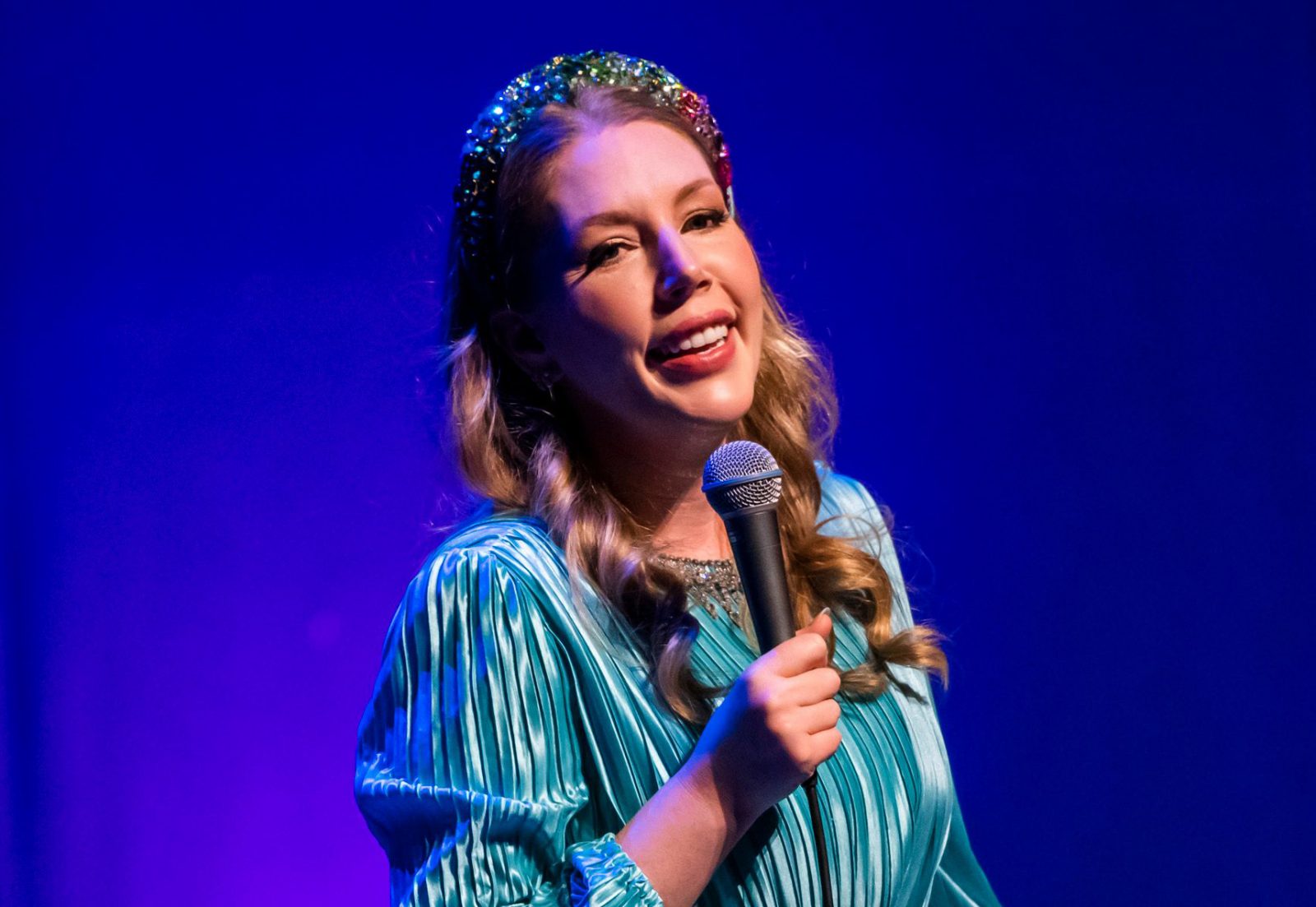 As a famous funny woman ‘off the telly’ Katherine Ryan has previously gone so far as to turn down slots on panel shows so that lesser-known female comedians can get ‘on the telly’ for the first time, writes CARY GEE.  Some of those women will be appearing with Ryan on her current tour. However, for the London run of new show ‘Missus’, Katherine Ryan, dressed as a ‘drag Statue of Liberty’ (her teenage daughter’s description of her, not mine) has invited the fabulous London Gay Men’s Chorus to open for her. It’s her first stroke of genius this evening.

After the LGMC have charmed the audience, seemingly equal parts straight/gay/male/female, with a selection of showtunes, Ryan takes to the stage to deliver a highly personal account of life as an independent feminist woman civilly partnered to her childhood sweetheart. Ryan was reunited with ‘husband’ Bobby (or Barbie as English people understand him to be called) following her appearance on Who do You Think You Are? (Or as Ryan calls it ‘Please don’t let me be a Nazi!’)

Her razor sharp delivery hones in with Exocet precision on the surprising twists of life, from a burglary (during which she managed not to spill her wine) to the birth of her new son. After being informed she was ‘too geriatric’ at the age of 35, for a home delivery she opted for a 5 star birth complete with afternoon tea. But it is her new, unexpected state of domesticity that provides the biggest laughs. In a discussion about woke humour that cleverly manages not to offend anyone she informs us that her daughter roots through her old jokes and calls her a ‘Karen’ at least three times every day leading Ryan to be cancelled even in her own home. She concludes, ‘If we we’re all equal we could tell jokes about everyone’.

Although Missus is firmly centred in the personal Ryan takes the occasional detour into the political – surprisingly sympathising with anti-vaxxers who have been lied to by the government, and acerbically criticising Matt Hancock as a man ‘who can’t even grab ass convincingly’.

Happy as she clearly is Ryan occasionally veers into a darker fantasy of what her life could be like including an admission that she ‘once noticed a funny looking mole on her boyfriend’s back and decided not to tell him!’ She adds that he was so unworldly when they met that she felt like she was ‘f**king the Little Mermaid’ for the first time. But as a ‘straight white’ man Bobby is the ‘only person she can tell jokes about nowadays. It’s your turn!’ she notes wryly.

Happily the straight white men in the audience laugh every bit as loudly as their wives, girlfriends and best gay mates proving that it really is possible for a truly skilful comedian to entertain a full house without leaving anyone feeling shortchanged, and on this form there really is none more skilful than Ryan. Sexy, sassy, laugh-out-loud funny, she even deigns to take questions from the audience at the end of her seventy minute set. As the gays sang earlier in Come What May from Moulin Rouge, ‘Suddenly the world seems such a perfect place’, and this evening that’s entirely down to the woman in the Statue of Livery dress. Brilliant!