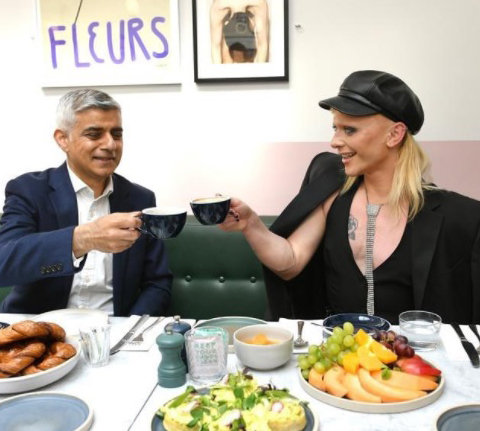 The vegan drag queen took the Mayor to Mildred’s, an iconic vegetarian restaurant in London’s Soho.

They were the first to eat inside the restaurant after the relaxing of Covid regulations on Monday.

“London is back open baby,” the East London drag queen announced to their Instagram followers.

The mayor said that it had been hard to see so many of the capital’s restaurants struggle over the past year, and that now was the time to show them support.

Bimini also revealed that they and the mayor had discussed the importance of LGBTQ+ spaces.

“We’re one step closer to being fully together again and the energy in the air is electrifying,” they said.

On their Instagram account they wrote that they had also discussed London’s vibrant culture, the importance of nightlife, and added teasingly “and my possible run for Mayor in the future.”