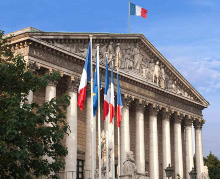 Today is National Coming Out Day

The French National Assembly has unanimously voted to ban gay conversion therapy which attempts to change the sexual orientation or gender identity of LGBTQ+ people.

The French lower house of parliament voted 115 – 0 in favour of the law to ban conversion therapy.

The proposed law would include penalties of two years in prison and a €30,000 fine.

If the victim is a minor then the sentence will be three years in prison and a €45,000.

The bill will now go to the Senate, where it must be adopted by February 2020.