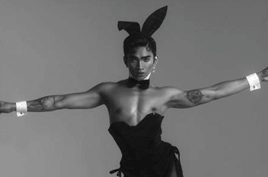 YouTuber and influencer Bretman Rock has become the first openly gay men to feature on the cover of Playboy magazine.

The 23-year-old Filipino is featured wearing a Playboy Bunny outfit on the cover of the latest edition of the legendary magazine which is now published digitally.

On Instagram, the beauty influencer wrote: “Da Baddest Bunny posting to p*** off more straight men, if you’re p***ed bc I turn you on then – say that, geez.”

He added: “Just for Playboy to have a male on the cover is a huge deal for the LGBT community, for my brown people community, it’s surreal, Like “Is this even f***ing happening right now?” type of vibe. And I’m so pretty.”

He also said that appearing on a Playboy cover had been an ambition of his.

“This dates back to when my manager sat me down and asked, ‘What do you want to do?‘ I jokingly said Playboy because I didn’t think it was possible,” he said.

“It proves to myself that I can do anything I put my mind to. And it’s crazy that Playboy believes in that as well and believes in me. It means the world to me.”