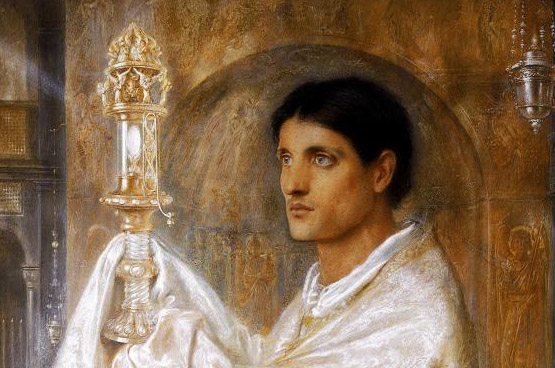 National Museums Liverpool (NML) is to celebrate this February’s LGBT+ history month with a major series of online exhibitions revealing the untold histories and lived experiences of LGBT+ people in the city.

To celebrate this year’s theme of “Body, Mind and Spirit” NML will curate a special collection of online commissions focusing on the LGBT+ community.

Highlights already confirmed for the online programme include commissioned works including new poetry from local writer Felix Mufti-White; a digital display of artistic works from members of the public on LGBT+ people, places and events which mean something to them; a focus on LGBT+ figures including code breaker Alan Turing; an exploration of “hidden histories” including a look at Polari; and an exploration of LGBT+ art history from the NML venues including classics such as Simeon Solomon’s “Mystery of Faith” (pictured) from the Lady Lever Art Gallery’s collection and the work of Rosa Bonheur at Sudley House.

In addition, there will be a House of Suarez Vogue Ball dress on display in the window of the museum of Liverpool. Commissioned for the Liverpool River Festival of 2009, the dazzling gown and headpiece were inspired by Liverpool’s sea-faring history.

Lead curator Kay Jones said: “Although we are unable to come together physically for LGBT+ History Month, we want to unite people through this online festival which celebrates the stories and experience of LGBT+ people past and present.”

Matt Exley, Co-Chair of NML’s LGBT+ staff added: “A journey through Liverpool’s LGBT+ history – from gay life at sea and in port to the modern=-day gay quarter around Stanley Street – is both rewarding and fascinating. From LGBT+ terminology and timelines to hard-hitting interviews and hidden histories, this collection of editorial content examines both historical and contemporary explorations of sexuality and gender.”

February’s LGBT+ History month is a nationwide event organised by LGBT+ charity, School’s OUT UK. For more information on events in your area go to School’s OUT UK