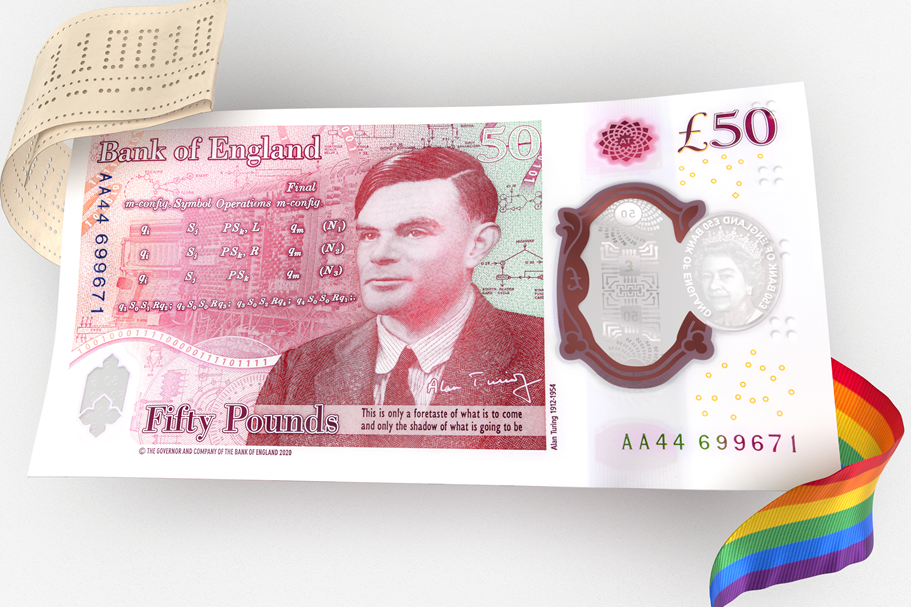 The new £50 note, featuring scientist and code breaker Alan Turing, has been unveiled.

Turing was chosen from a list of 989 people to be the face on the back of the new note.

Turing is best known for his work at Bletchley Park breaking the Germans’ Enigma code during the Second World War, which, historians estimate, shortened the war by as much as two years, and saved many millions of lives in the process.

Turing was also gay, at a time when homosexual acts were illegal. He was prosecuted for gross indecency in 1952 and died from cyanide poisoning two years later at the age of 41. The inquest concluded that his death was suicide.

Turing was given a posthumous pardon in 2013 and in 2017 the Turing Law was passed pardoning all men who had been historically convicted on account of their homosexuality.

As well as Turing’s photograph and signature, features of the new polymer note include:

A table and mathematical formulae from his 1936 paper On Computable Numbers with an application towards the Entscheidungsproblem, which is recognised as being as one of the foundations for computer science

The Automatic Computing Engine (ACE) Pilot Machine, the trial model of Turing’s design and one of the first electronic stored-program computers

A quote from Turing in an interview in The Times on 11 June 1949: “This is only a foretaste of what is to come, and only the shadow of what is going to be.”

Unveiling the new note Andrew Bailey, Governor of the Bank of England, said: “The person chosen to feature on a currency can embody the spirit of a nation. In his remarkable achievements, Turing did just that. And in doing so, showed us the way to the future.

“Alan Turing was a gay man, whose transformational work in the fields of computer science, code breaking, and developmental biology, was still not enough to spare him the appalling treatment to which he was subjected.

“By placing him on this new £50 banknote, we celebrate him for his achievements, and the values he symbolises, for which we can all be very proud.”

Today, 25 March, the Bank of England is flying the rainbow flag over their Threadneedle Street building in London.

The new £50 note will be released on 23 June, Turing’s birthday.