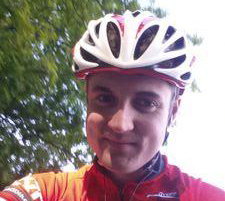 Cyclist Clay Davies says that a near-death experience made him come out, and has slammed his professional body for not supporting him.

In an interview last month with cycling magazine The British Continental, Davies, who rides for the Spirit Bontrager BSS Rotor team, said: “It took being knocked off my bike by a car nearly being killed for me to come out. I broke both my arms and had my head crushed by the rear wheel of an Audi. That was my epiphany, the moment I decided to come out and tell people.

“But it shows how deeply in the closet I had been beforehand. It took quite literally nearly dying for me to reveal my sexuality. Basically, I thought, ‘F**k it, I’m going to go and tell everyone now.’”

However he later went on to criticise the British Cycling (BC) professional body for not stepping up and supporting him.

“It’s shocking, to be honest, that BC haven’t reached out to me directly. It’s been three weeks now,” he said. “How hard is it for BC to do that?

“They’ve got my contact details. My name’s not exactly difficult to find, is it? How hard is it for them to send me a one-liner to say, ‘Yes we’ve read it, yes we’re on it, we will get back in touch if we need anything from you’? But not had a thing.”