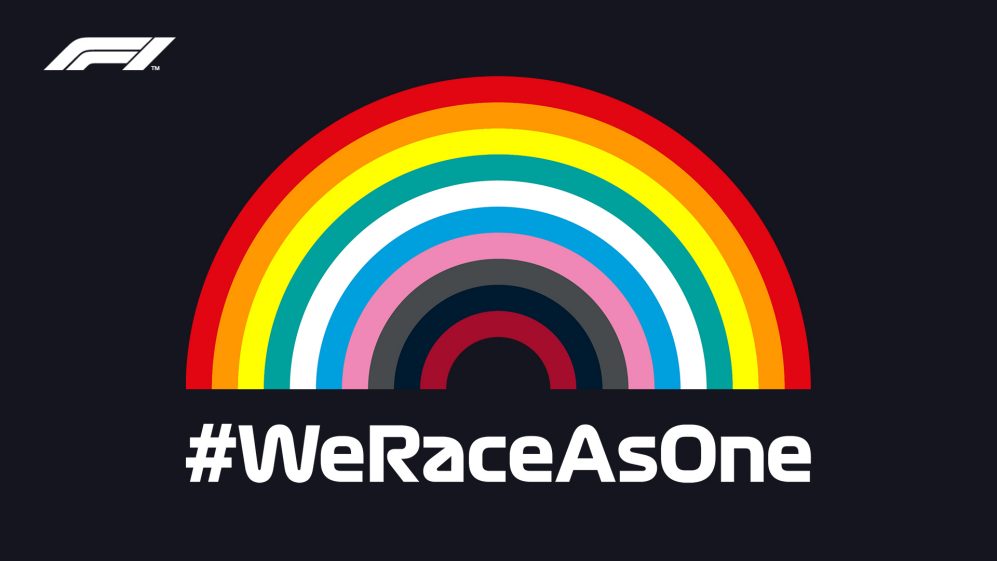 Come to the Cabaret, Old Chum

As the Formula One season reaches it’s fever pitch. Arguably the greatest to ever do it, Lewis Hamilton, is neck and neck with young upstart Max Verstappen going into the final round in Abu Dhabi.

Amongst the carnage that was the Saudi Arabian Grand Prix. The sport’s superstars used their platform to challenge the anti-LGBTQ+ laws in the Middle East. Just a few months ago, we spoke about four-time world champion Seb Vettel and his rainbow outfit that he wore at the Hungarian GP. The outfit was in protest of new anti-LGBTQ+ laws that slashed the rights of queer people in the Hungary.

This time, Vettel opted to sport rainbow trainers throughout the Saudi Grand Prix, where he also arranged a go-kart competition for Saudi women, who have only recently received the right to drive. Vettel wore his t-shirt proudly throughout the weekend with the message #Race4Women, we need more Seb’s in this world.

Alongside Vettel, we also spotted his German compatriot and son of Michael Schumacher, Mick Schumacher, wearing a rainbow t-shirt with pride over the weekend where he is competing for HAAS F1 in his rookie season.

The cherry on the cake came when the sports GOAT, Lewis Hamilton, won the first ever Saudi Arabian GP with a rainbow, non-binary and trans flag designed helmet. Hamilton’s helmet design included the moniker “We stand together” on the back. While Hamilton was quiet when asked about the issues over the weekend, seeing the champ and his rainbow helmet stand tall at the end of the race, spoke a thousand words.

Despite this, F1 bosses have rightfully been targets of criticism for adding Saudi Arabia to the 2021 calendar. Some fans believe that elite sporting competition has no place traveling to countries with such abysmal human rights records.

Unfortunately, it’s clear money talks. While it’s easy to scoff at the decision to travel to the Middle East. If F1 didn’t travel to Saudi Arabia then moments such as Hamilton’s statement of equal rights and Seb’s #Race4Women would never have happened, and progress would never be made.

Activists, Racing Pride, have completely transformed the conversation around equality in motorsport. Their co-founder and racing hunk Richard Morris, took to his Twitter to comment on the weekends’ activities saying:

“This couldn’t have happened if he hadn’t gone there and taken the opportunity to show his values. One of the beautiful things about sport is that it gives that platform for positivity if you’re prepared to use it.”

Richard is right. In Schumacher, Vettel, and Hamilton, the sport now has some incredible allies who hold the power and voice to assimilate change in motorsport with the help of Racing Pride, and subsequently influence the culture of the countries where the World Championship is competed.

We’re a few years off the sports first female or new LGBTQ+ driver. However, the sports first full-time black driver became the greatest to ever do it. We have every faith that Formula One can lead the way when it comes to promoting equality on the international stage, love knows no bounds. Perhaps one day, an LGBTQ+ racer will stand on the top step. Until then, we must support Lewis, Sebastian and Racing Pride!