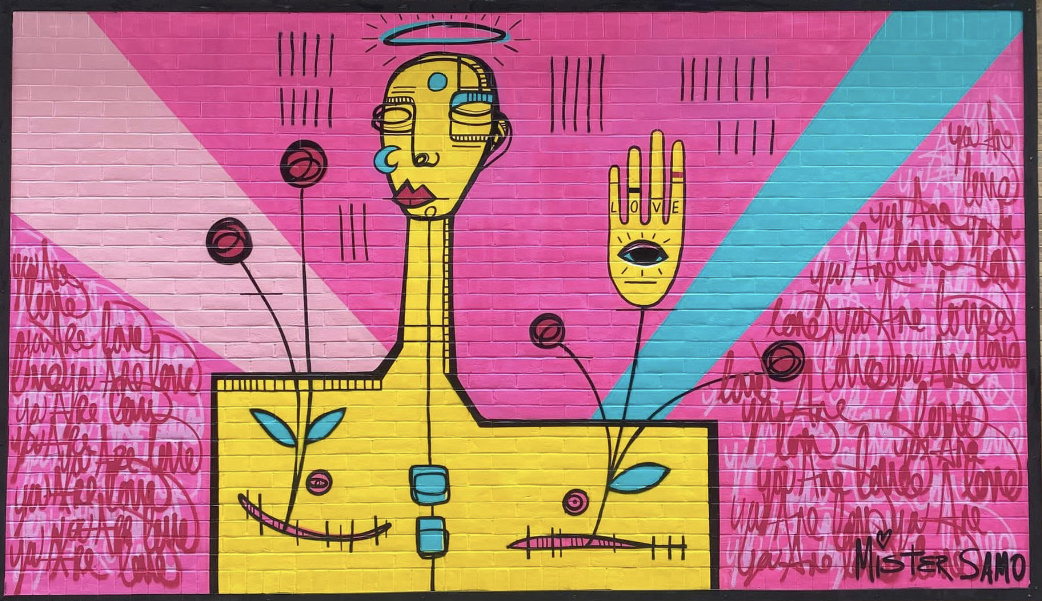 Queer street artist Mister Samo (he/ him) believes all trans people have a story to tell and celebrates trans diversity in a major new work, he tells Rae Joan Elkington on today, Trans Remembrance Day/

Samo is a trans rights activist with plenty of creative tools in his arsenal as an illustrator, a tattoo artist, an educator, a professional artist and a key figure in the UK street art and paint-jam scene.

His weapons of choice are spray paint, acrylics and hugs, and he loves nothing more than a brew and a chat.

Samo has proudly and publicly documented his own transition and is now using his platform as an artist to promote trans visibility and inclusivity through I Exist, a global art project celebrating trans bodies, making visible the often vilified or misunderstood whilst engaging the broader community in conversation.

His work has some well-known admirers, including good friend Game of Thrones actress Kate Dickie, punk band the Sleaford Mods (whom he praises as LGBTQI+ allies) and Shadow Minister for Schools, Stephen Morgan.

In 2019, Samo was chosen as one of just 50 sponsored artists to paint murals on the streets of New York for the VICE Recognise Me campaign, in honour of the 50th anniversary of the Stonewall Riots at World Pride.

“It was pretty monumental for me,” he gushes. “Just five of us were selected, to represent the L, G, B, T and Q”, which included his friends, (internationally-acclaimed, Mancunian queer street art/ muralist duo) the Nomad Clan. “Street art can have toxic masculine traits because of the old skool graffiti world, so working with other queer street artists was an inspiring, liberating, and super rad experience”.

It was also here that Samo connected with filmmaker The Dusty Rebel. “After travelling the world and connecting with queer street artists for over ten years, I was only the second trans street artist he’d ever found… it was mind-blowing to find I was in such a minority. It really elevated my path, my work, what I believe in and how visible I chose to become.”

“Now is the time for us not only to normalise but to admire the beauty of trans bodies, as we have with cis nude bodies throughout the history of art.”

Samo knew that I Exist needed to be a big, powerful project with an educational plan that would and could evolve forever to become so much more than just a one-off exhibition or book. The name was inspired by an I Exist contributor, non-binary activist Jude.

Backed by the Arts Council, the initial body-of-work includes portraits, stories, street art and quotes from trans people at various stages in their social/ medical transitions. Samo explains, “Our individuality is what makes us so unique, and we all have a story to tell. Trans bodies are beautiful, even if they don’t fit the societal view of how a body should look.”

In collaboration with Tony Stiles, Samo has produced an I Exist art book, which has gone to international new homes, from the UK to Australia, Sweden and even the Queer Library in NYC. He loves the idea of the book being of support to “someone who may be having a hard time or ‘stealth’ (closeted), that they can be at home with the book, exploring it safely.”

Tony (who has collaborated with Banksy, Luke Jerram, and Martin Parr) took Samo’s awe-inspiring work and skillfully wove more conceptual layers of art. The exposed spine with visible, beautifully bound stitching and exposed page elements through cuts an ode to the surgeries, physical scars, vulnerabilities and strength of the trans contributors. At A3 size, it intentionally takes up physical space. “It’s a bit like street art in that way; you can’t ignore it. You have to look at it.” Samo passionately exclaims. “It exists.”

YOU ARE LOVED / ART IS MEDICINE

As part of the positive sticker slap movement, Samo’s mini artwork messages “you are loved” and “art is medicine” were designed to counteract the negativity which sadly still exists. “Negative trans narratives make me want to give more love and be more visible as a positive, successful trans role model, living a happy and healthy life. As trans people we’re literally shape shifters, that’s badass and we’re cool! “