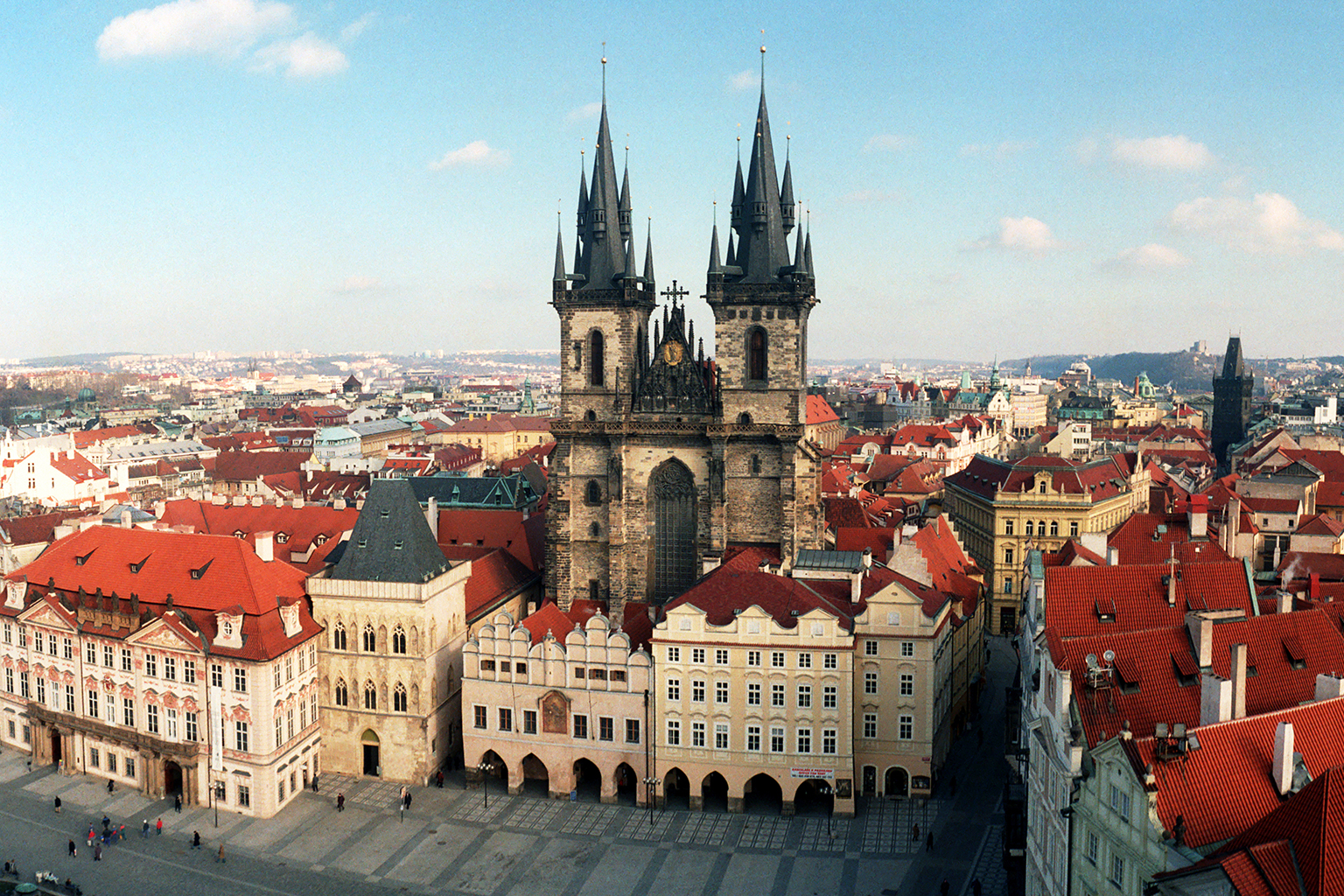 Impressive spires and onion domes loom in the distance, as ethereal statues sink into shadow in the marmalade glow of a fading sunset. No, this isn’t a hallucination or dream: it’s one of the most vivid vistas on the entire planet, from the 14th-century Charles Bridge to Prague Castle.

Prague is the largest city in the Czech Republic (formerly Czechoslovakia 1918-1992) and also its capital, situated in the north-western part of the country. The settlement was founded in the 7th century, and is split in two by the luminous blue of the River Vltava. On its right bank, the most glorious attraction has to be Staré Město (Old Town). This medieval heart of the metropolis, a Unesco World Heritage site, is a romantic milieu of pastel mansion houses with red-russet roofs, cobbled streets and vintage gas lighting. In the Old Town square, where bustling Christmas markets are held every November to December, a major feature is the magnificent 600-year-old astronomical clock – on the hour, there’s an enchanting procession of the Twelve Apostles (orloj.eu). Josefov, the Jewish quarter, is also in this vicinity. Expect to see various archaic synagogues, an atmospheric cemetery that’s crammed with gravestones, and the birthplace of the literary genius who redefined nightmarish complexity, Franz Kafka.

While on the left bank, an unmissable sight is the 63.5 metre-tall, steel-framed Petřín Lookout Tower (muzeumprahy.cz). Although it feels somewhat like a space weapon that can’t function, it’s a major tourist draw. And if you’ve had enough energy bars, there’s an opportunity to climb the 299 steps to the pair of observation platforms at the top. Also on this side of the river is the spectacular Saint Vitus Cathedral (katedralasvatehovita.cz), which took over half a millennium to build. Highlights are its captivating chapels, Art Nouveau stained glass, and the stunning silver tomb of Saint John of Nepomuk. This enormous church is actually in the aforementioned castle complex (hrad.cz), construction on which began in AD 870. And according to the Guinness Book of Records, the fort is the biggest of its type in the world (70,000 square metres). Once the seat of power of the kings of Bohemia – in historical terms, a region that amounted to the whole of the Czech territory – within the grounds are the Romanesque, Baroque and Gothic Saint George’s Basilica with its marvellous red brick façade and ivory turrets; and the well-preserved Golden Lane. The modest 16th-century dwellings that still occupy one side of this vibrant street originally housed guardsmen.

In a sense, the castle complex can be said to be a microcosm of the entire capital, in that it’s a superb melange of different eras and styles of architecture that complement each other as effortlessly as a crew in the Boat Race. But, in fact, it’s a mini-miracle that Prague has remained so intact and pristine. Czechoslovakia was invaded by the Nazis in 1938, resulting in the city being bombed extensively by the Allies during the Second World War. Three years later, the nation was subsumed into another totalitarian regime by the Soviet Union. At this time, within this political entity and many of the countries under its subjugation (the Eastern Bloc), homosexuality was regarded as a sexual perversion and criminalised. And gay people were persecuted.

Nonetheless, despite being ensnared in this despotic zone, in the Czech Republic same-sex relations between males were legalised in 1962; and, since the state separated from an imploding USSR in 1991 (when Soviet troops pulled out), it has followed a fairly progressive political and social path – a process accelerated by joining the European Union in 2004. In respect of LGBTQ+ rights, this has manifested itself in recognition of registered partnerships in 2006, and adoption of numerous anti-discrimination laws in 2009, inter alia.

And as for Prague, it’s blossomed into a cutting-edge of cool, with a plethora of chic cafés, drinkeries and restaurants. Nowhere is this more apparent than in the main gay quarter, the hip, leafy residential neighbourhood Vinohrady (literally meaning vineyards). It’s a somewhat small scene, which isn’t really astonishing as the capital’s population is just 1.3 million. An initial spot in this locality to kick off any alcohol-related shenanigans is the homely Piano Bar (Milesovska 10, piano-bar.cz). It’s the oldest non-heterosexual haunt in the metropolis and has got a quaint outdoor terrace. They often put on bingo, outrageous transvestite shows, and serve lovely beer – Czechs are renowned for their pale lagers including Pilsner Urquell, Gambrinus and Budvar.

A ten-minute stroll away is Club Termix (Třebízského 4a, club-termix.cz), which is also frequented by a gregarious twenty- and thirtysomething crowd. It’s a bright and breezy elongated space with an industrial, hi-tech vibe (alloy pipes decorate some of the walls) and the odd kooky touch – a model of half a pink car protrudes from above the bar. This shindig is quite eclectic in the choice of tracks that get played, and they also do themed evenings– Wednesday is a Czech-cum-Slovak disco and on the next night everybody belts out karaoke.

Just up the road is its sister joint, the LGBTQ+ Club Termax (Vinohradská 1789, club-max.cz). Said to be the biggest such establishment in the country and enticing slightly older patrons, this relatively new kid on the block has an ultra-modern interior and electrifying atmosphere. There are a couple of bars and a sizeable dance floor where electronic beats are a speciality. Hours are Fridays and Saturdays from 10pm till 6am.

Additional thrills are to be had at another legendary bash, the monthly OMG at Mecca (U Průhonu 3, omgparty.cz). Look forward to an up-for-it heterogeneous bunch that can’t get enough of the hunky go-go performers, and anthemic tunes spun by a roster of superstar DJs. The trendy venue, which sprawls over three floors and has five bars and a chill-out zone, features sophisticated lighting and a state-of-the-art sound system by Funktion One.

Located in Old Town, Café Bar Flirt (Martinská 419/5,flirt-cafe.cz) is a predominantly ochre-coloured enclave with a partial brick-ceiling. It’s split into two. On ground level is a relaxed, cosy eatery, while in the basement is the free-entry club (open Wednesday to Saturday from 9pm to 5am) where a host of resident disc jockeys keep punters entertained with several kinds of music – electro, deep house, R&B, et al. And who doesn’t need friends, so it’s fortunate you can catch up with them in the same-named hangout (Bartolomějská 11,friendsclub.cz). Inside this lounge-cum-club (hours – 7pm to 6am depending on what’s happening), which is festooned with balloons and has a youngish, diverse clientele, there’s a splendid range of amusements. These include drag artistes, comedy acts, golden oldie pop nights, and quizzes. As Czechoslovakia was behind the Iron Curtain for over 40 years (1948-1989), it’s fascinating to explore what life was like during the Soviet occupation. The Museum of Communism (V Celnici 1301/4, muzeumkomunismu.cz) affords a glimpse into this totalitarian existence. The role of politics, art, media manipulation, the army and police forces, and labour camps, are just some of the subjects considered. And the exact nature of the oppressive system is thoughtfully chronicled through: short videos, photos, newspaper cuttings, medals, books, posters, authentic archives and even by historic mock-ups. Indeed, it’s possible to comprehend the angst and dread others might have experienced, as you walk through a reconstruction of an interrogation room. The KGB Museum (Vlašská 13, kgbmuseum.com) further enlightens one about the tyrannical characteristics of the USSR annexation, by detailing the much-loathed former Russian secret service – it had operations throughout the Eastern Bloc. It’s a pretty small gallery but has an absorbing array of original instruments of state control: spy cameras; concealed weapons; military uniforms; listening devices and torture apparatus such as that needed to carryout electric shocks. This unique establishment also serves to remind one of propaganda directed to stir up hate (as in when countries required their citizens to go to war), the notion of nationality and ideas of racial superiority. Perhaps the most intriguing items are Lenin’s death mask, and the ice pick used to assassinate Trotsky in Mexico in 1940.

If the animosity between the socialist states and the capitalist West had ever reached its diabolical nadir and resulted in nuclear war last century, ostensibly Prague was prepared. Why? Because from the 1950s to the early 1980s, several underground fallout shelters were erected – including stations in the metro system that could be converted for this purpose – that together were capable of holding 40% of her population. The Nuclear Bunker Museum (nrOlšanské náměstí,prague-nuclear-bunker.com), which is dug five storeys into Parukarka Hill, and Hotel Jalta basement’s Cold War Museum (Václavské náměstí 45,hoteljalta.com) are such supposedly life-maintaining, civil protection facilities. Yet it’s clear from a visit that enduring the drab, sterile, cramped conditions, meagre rations and trenchant paranoia would have engendered anxiety, depression and even suicide. Both last-ditch bolt-holes contain soldiers’ outfits, communication equipment, gas masks, pictorials, the obligatory uber-thick steel blast doors, and other relics from the Soviet epoch.

The Czech capital is divided into ten numbered municipal districts; with the major upscale shopping areas – Na příkopě and Parizska streets, and Wenceslas Square – all being in Prague 1.

Exactly how to refer to the Czech Republic can get a bit tricky or confusing at times as the domain’s name has changed on a few occasions. In a historical context, Bohemia used to refer to all of the Czech lands or territory, for example when it was a kingdom in the Middle Ages. Notwithstanding, Nowit’s just one of three regions, albeit the biggest, within the nation along with Moravia and Czech Silesia. Once the Habsburg monarchy disintegrated at the end of the First World War, Czechoslovakia came into being. But it split peacefully into two distinct states on 1 January 1993: Slovakia and the Czech Republic. And since 2016, the country has adopted Czechia as a shortened version.

Conveniently situated in Vinohrady, in a charming early-20th century Art Deco building, this homely des res is perfect for those on a budget. Its owner, American expat Ron, who is gay, is often on hand to provide local tips. The rooms (from £20.50 per night) are super-clean, have decent sized beds and Wi-Fi access. One even has a whirlpool.