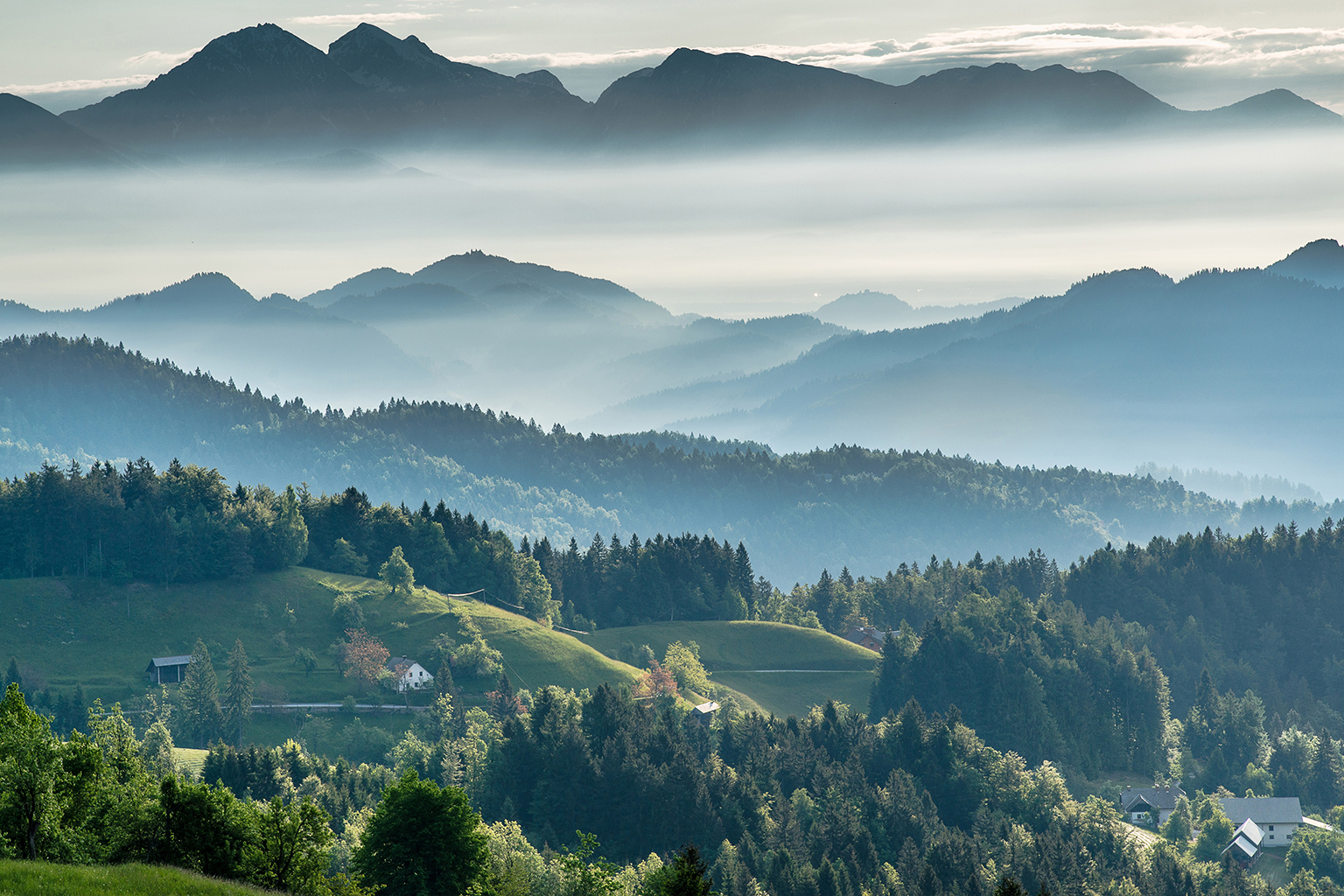 “When God created the world, he kept the most beautiful bit for himself,” our guide to Slovenia tells us.

“And then God realised he had forgotten the people here, and so he gave it to us instead.”

Wherever you go in the world, local people like to spin a similar yarn, and yet, here on the shores of Lake Bohinj (pronounced Bokinge), you could almost believe it’s true. Less crowded than its more famous neighbour Lake Bled, Lake Bohinj is a 5km glacial lake, located in the Trigva national park. Surrounded by forest, which offers camping right on the shores of the lake, and overlooked by the snow-capped Julian Alps, you can almost hear the sound of the violins that Stradivari made from wood he collected in the forest as you glide silently in a tourist boat across the crystal clear waters.

The precipitous valley rises on all sides, but no view is more startling than the triple peaks of Mount Triglav, as seen on the Slovenian flag. It’s probably a wonderful hike up the mountain, but for those lacking time, or will, or the right shoes, don’t panic. Take the Vogel cable car ride to the ski hotel instead. It’s an exhilarating five minutes that afford magnificent views of the mountains reflected in the lake below. Even more fun is the stomach churning, rollercoaster whoosh back down afterwards! Although when I visited it was late May and the snows had mostly melted into the lake, I was assured that skiers were enjoying the slopes just a few weeks previously – and at considerably less cost than in neighbouring Italy and Austria.

After lunching on an utterly delicious sausage and barley stew we were driven through an enchanting landscape – from our minibus we could actually see trout swimming in the blue-green streams below – to make the famous Bohinj cheese in a tradition that dates back centuries.

I’m not sure who thought it would be a good idea to invite a dozen gay men (and one woman) to churn their own butter and cheese, but the afternoon, spent with the delightful Anica (of the Gartner Farm Stay) is an absolute scream, and the end result deliciously aromatic and spicy. It also provides a surprisingly good upper-body workout.

Fun, “farm games” and a BBQ are enjoyed on welcoming local Ranch Mrcina, and we even got to make our own scarecrow – I trust the poor chap we dressed has finally removed the straw from his underwear – then it was all back to our “eco” hotel for a spin in its very own bowling alleys. There’s also a water park although sadly the outdoor pool and slide was closed when we stayed there.

Despite the fact that we are definitely “not in Kansas anymore” we receive a warm welcome wherever we go. No one bats an eyelash at the sight of more gays than they’ve probably ever seen before converging upon their restaurant/ bar/ mountain.

Back in our time machine, we are teleported to Disneyland, or at least to Lake Bled. If you’ve seen one photograph of Slovenia, it’s likely to be of Bled. After a tour of Bled Castle, which nestles eyrie-like atop a vertiginous bluff and offers simply astonishing and ever-changing views of the luminous lake below, (the excellent local sparkling wine and honey I bought in the castle gift shop was much appreciated) we take a trip to Bled Island (the only island in Slovenia) in a flat bottomed Pletna boat. Sheltered from the sun by a candy-striped awning we are rowed to the island by a chap who appears to have been rowing standing-up for centuries at least.

Climb the 99 steps to the Church of the Assumption and make a wish as you ring on the Wishing Bell, then enjoy a slice of Potica cake. Made with walnuts and served with heart-stopping amounts of cream it’s Melania Trump’s favourite taste of home. Breathtakingly beautiful Lake Bled, (and Bled Island) has to be seen, well, just because it’s there.

Slovenia has more than glacial lakes. It also boasts a short coastline. Picturesque Piran (Pirano if you’re Italian) is located on the tip of a narrow peninsula from where you can see Croatia, Austria and Italy. One of the best preserved towns on the Adriatic coast Piran, much quieter than neighbouring Portoroz, with its crowded beach and sparkly casinos, is a gem of Venetian Gothic architecture, narrow alleys, fishing boats, and a daily market, which takes place beneath the statuesque gaze of Piran’s most celebrated resident, Italian violin virtuoso Guiseppe Tartini. After the forests, lakes, and mountains of Slovenia, the coast comes as something of a surprise, albeit a very welcome one. What better way to cool down than with a cold Slovenian beer and a dish of freshly netted sardines in a harbourside tavern?

Despite its apparent rush to modernity and liberalism you never actually feel hurried in Slovenia. This is equally true of capital Ljubljana. With a population of just 300,000 it is like the best of a bigger city with all the boring bits removed. What you are left with is essentially one long café terrace that cuts through the city either side of the peculiarly green waters of the Ljublianica river. Of course, having made the absolute most of an afternoon sampling the varied, uniformly excellent and remarkably reasonably priced Slovenian wines, I may not be the most reliable witness!

For the more adventurous there is Klub Tiffany (tinyurl.com/ycewxpsw), Ljubljana’s no frills gay nightclub. Reminiscent of any small town club Tiffany is devoid of all non-essentials. Located in the Metelkova Mesto, a former military barracks that is now a sprawling squat cum cultural hub and home to a number of alternative nightspots you come to drink beer, meet new friends, and dance to decidedly old-school music. Or to hang out in the central courtyard, where you are as likely to be offered a spliff as someone’s telephone number. It reminded me very much of evenings lost long ago in Copenhagen’s Freetown Christiana.

Our trip, organised by the lovely Mattejs of Slovenia’s annual Pink Week ended in the altogether more formal surroundings of the Dragon Ball, held, once again, in the 12th century castle which overlooks the city, and which, for this evening at least, has been illuminated in pink, so that the whole city knows the queers have come to visit. As we embarked from the funicular railway the great, the good, and the merely famous (in Slovenia) welcomed us onto a “pink carpet” rolled out in our honour.

An unforgettable moment among many enjoyed in this most welcoming, LGBT-friendly republic. There really is a reason why Slovenia, the only country from the former Yugoslavia to have equal marriage rights, is also the only country in the world which boasts the word “love” in its name.